Review: Witness for the Prosecution 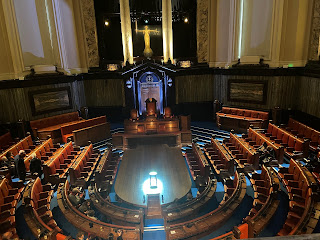 Over October half term, me and my dad took a trip to the grand setting of London County Hall to see Agatha Christie's lesser known play, Witness for the Prosecution. What an incredible setting it was for such a play, as it (without giving away too much) concerns the tumultuous trial of Leonard Vole, accused of murdering a widowed old woman he had made friends with in the months preceding her mysterious death. Without spoiling the intricacies and twists of Christie’s magnificent plot, I can say that the whole experience was immersive, despite having seats up in the public viewing gallery of the ex-council chamber, as opposed to paying quite a bit more to sit down in the court itself! However, by some twist of fate, one of the jury seats (in which the ‘jurors’ make the final decision on the case and are sat adjacent to the judge!) was free, and due to the requirements of the show’s ending, someone from the gallery was asked to move down for the second act. I may have left my dad behind (I will neither confirm nor deny this), but I must say that while I would not have chosen to spend the sum of money required to sit in those seats, it was a rather nice privilege to try it, even if it was only for around half of the show!

Returning to the show itself, one of the most impressive elements of the performance was the seamless and well-choreographed transitions performed by the actors who carried both set and props to great dramatic effect. The set itself was aided by the ex-courthouse setting, and it really added a sense of authenticity to the performance, such as the pre-existing, intricately carved judge’s chair. On the other hand, holes in the stage were used to build parts of the set such as the dock holding the accused. 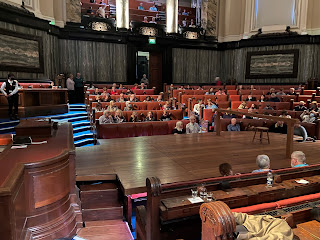 The cast was, to both me and my dad, excellent. Leonard Vole, played by Joe McNamara, portrayed the character with raw and honest qualities, as well as displaying a great range of emotions. What makes this all the more impressive is that this role is McNamara’s West End debut! One actress that really stood out to both me and my dad was Emer McDaid, who played Romaine Vole, Leonard’s wife. McDaid portrayed the development of Romaine’s character with great depth and complexity, as at first she appears as a funny, slightly dim housewife with a dry sense of humour, but later in the play the character appears as complex, deceptive and manipulative. Finally, the two actors portraying the rival QCs in the trial, Sir Wilfrid Robarts, played by Jonathan Firth, and Mr Myers, played by Miles Richardson both impressed. Firth played the defence barrister in a down to earth manner, while still portraying the intelligence, humour and sarcasm of the character to an excellent extent. On the other hand, Richardson played a distinctly unlikeable character to the audience, and one that sparred with Robarts consistently, to the ire of the trial’s judge. The way that the characters of Robarts and Myers interacted was incredibly impressive and effective for the performance, and oddly it made it all the more accurate to a crown court trial in the real world, as me and my dad discussed following the end of the performance.

I have not given away too much in this review, as you must go to the court itself to discover the case of Mr Vole - I highly recommend it as both a fan of legal dramas and immersive theatre!

Art and Literature Film and Drama