Everyone’s Talking about The Menopause 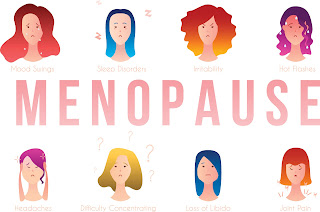 Firstly, what exactly is the menopause you might be wondering. Well, the menopause is the stage of a woman’s life when her ovaries have stopped producing hormones and her menstrual periods stop. The menopause usually occurs between the age 45 and 55, some woman may also experience menopause in their 30s or even earlier than that.

The menopause is influenced by the change in hormone levels. Throughout a woman's fertile years she is able to produce oestrogen. Oestrogen is the hormone which is mainly produced in the ovaries. Oestrogen is the hormone which controls a female's reproductive system and her characteristics at puberty. So, as a woman gradually gets older her store of eggs in her ovaries begins to decrease which therefore means less oestrogen is being produced which causes the body to start to go through perimenopause which eventually becomes menopause.

On the surface the menopause doesn’t appear too bad, however becasue of the decrease in the production of oestrogen your body can experience many many symptoms which inlude: night sweats, sleeplessness, hot flushes, irritated skin, low mood, problems with memory or concentration, pelvic pain, fatigue, bladder incontinence, heart palpitations, anxiety, weigth gain, headaches loss of libido and many more. Every womens menopause experience is unique so the duration and severity of the symptons can vary from person to person. Nevertheless, these symptoms can be severely impactful on a woman and her everyday activities. All of these symptoms are caused by the lack of oestrogen being produced in the body.

Unfortunately all women will go through the menopause at some stage in their lives (it is unavoidable really). Due to the symptoms of the menopause it can actually be a very stressful time which can cause many women anxiety, irritablility and depression. There was a case study which showed that women are two to four times more likely to experience a major depressive episode during the menopause than at any other time in their lives. In some cases the menopause can be dibilitating and casue serious problems in womens lives.

Women going through the menopause are not mentally ill, unlike what some doctors think who inappropiatley prescribe antidepressants to women as treatment for their menopausal symptons. There are a number of more suitable treatment options out there for women such as HRT (Hormone Replacement Therapy). Sadly, during the early 2000s a large study by the Women’s Health Initiative announced results showing an increase in breast cancer among women taking HRT.  This claim shifted the views on HRT abruptly, and HRT was abandoned and deemed as a carcinogen overnight. However, years later this study has been proven to have been exaggerated and completely misinterpreted leaving women and healthcare professionals still unsure on this helpful and in some cases life changing medication.

The menopause is a very important topic which has only recently been brought to light thanks to Davina Mcall’s recent documentary, Doctor Louise Newson’s work and other female celebrities and medical groups such as Harley Street Menopause Clinic. At last, it is beginning to be talked about more and more and the stigma is breaking down. I personally have never been educated about this topic in depth, I never knew about the symptoms and effects of the menopause and that there are treatment options out there. I just thought a woman's menstrual cycle stopped and that was it. As a female I feel as if we have been let down by the lack of knowledge and medical intervention on this topic. I am glad it is now beginning to be recognised and that I have been able to see female members of my own family getting the help they need and the benefits it has given them. At some stage in my life it will happen to me and every other female on this planet so we can only hope that treatment and education of menopause improves.