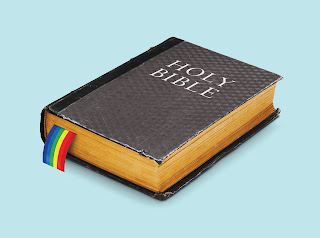 Christianity has been the recipient of some… less than positive attention recently, largely because of the stance a lot of Christians take on homosexuality. At first glance, it’s easy to see why many people hold this opinion, as there are many verses in English translations of the Bible which definitely appear to condemn it (although that’s no excuse for the abuse some Christians show towards members of the LGBT+ community, but anyway). However, none of the Bible was originally written in English, and it is likely that many verses from the Bible which we consider today to condemn homosexuality are actually mistranslations of the original text, brought about by the personal biases of translators.

One instance of this is the Greek word arsenokoitai, which can be found in 1 Corinthians and 1 Timothy. In many modern translations of the Bible, this has been translated as ‘homosexuality’; however, given the contexts in which the word was used, it’s unlikely that this is what it was referring to. Arsenokoitai is a compound word derived from the Greek words ‘arsen’ (male) and ‘koite’ (bed) - literally, it translates to ‘male-bedders’. It’s easy to see how people have interpreted that to mean homosexuality. However, compound words are not always necessarily an exact product of their components. Think of the English word ‘butterfly’, for instance - etymologists have suggested that this word is derived from the creamish colour of common species, or from an ancient belief that they stole butter. It definitely doesn’t mean that they are literally flies made out of butter. When you put two words together to make a new word, it takes on a new meaning. In the case of arsenokoitai, this is even more likely. It is a very rare word in Greek literature, and although it’s difficult to put an exact date on when these things were written, some believe that Paul actually coined the word himself for use in these letters. Arsen and koite, although they weren’t joined together until later, were used for at least 1600 years prior to these letters being written, and in almost all of these cases they were used when referring to some form of pedophilia or sexual abuse. Furthermore, early English translations translate it to ‘liers with mankind’ or ‘abusers of themselves with mankind’, which definitely have different connotations to what we see today as sexual orientation, or a same-sex couple in a happy, consenting relationship. Moreover, at the time when Paul wrote this letter, homosexual relationships usually took place between adult men and adolescent boys - in other words, pedophilia - and it is therefore likely that, through the term ‘arsenokoitai’, Paul was condemning power for abusive purposes, an excess of lust, and sexual exploitation.

This is further seen in Romans 1, another verse commonly cited as evidence that gay relationships are sinful. In Romans, Paul writes this: " . . . for this reason God gave them up to degrading passions. Their women exchanged natural intercourse for unnatural and in the same way also the men, giving up natural intercourse with women, were consumed with passion for one another. Men committed shameless acts with men and received in their own persons the due penalty for their error. " This does allude to homosexuality, but it also connotes many other things which are far more likely to be the main point Paul is trying to make here. The 'shameless acts' mentioned in this passage likely refer to some weird sexual stuff that happened frequently in this period, not least the idolatry and extreme promiscuity practised by Emperor Gaius Caligula himself very soon before Paul wrote his letter. Historical sources from the time tell us that Caligula claimed to be divine, worshipped statues of himself, and even set up a temple dedicated to himself, with 'priests and victims of the choicest kind' - I'll leave you to figure out what that might mean. Furthermore, according to Roman writer Suetonius, Caligula 'lived in perpetual incest with his sisters' and was known to have extreme sexual relationships with many of his dinner guests' wives. Suetonius also describes multiple similar encounters between Gaius Caligula and other men. Paul wrote his letters to the Romans very shortly after the end of Caligula's rule, and it is likely that this behaviour is what he was really referring to - idolatry, rape and extreme promiscuous behaviour, rather than peaceful, consenting gay couples.

Like arsenokoitai, the word malakoi has also been mistranslated to 'homosexuality', which literally means 'soft' and is used elsewhere in the Bible when describing a certain type of cloth. Morally, it would have been used to refer to weakness, laziness, or lack of self-control. The word wasn't actually translated to 'homosexuality' until the twentieth century, when there was already a lot of Christian stigma against homosexuality and translators were even more likely to be biased.

The story of Sodom and Gomorrah in the Old Testament has also proven very problematic when it comes to Christian viewpoints on homosexuality. In the story, God sends two messengers (often described as being angels) to neighbouring towns Sodom and Gomorrah, where, instead of welcoming them and showing hospitality, the townspeople process to 'yada' them. Though there is some dispute as to what the Hebrew word yada literally means, it is often seen in this specific context to mean ‘have sex with’ or ‘have intimacies with’. However, the word yada is extremely common elsewhere in the Bible, and 973 times it has been translated simply to mean ‘to get to know’. Although in this context it almost certainly does refer to sexual activity (later on in the story Lot offers his two virgin daughters to the Sodomites instead, using the same term ‘yada’, a particularly gross detail which is often glossed over when analysing this story), this variation in translation goes to show how words in foreign languages often can’t be translated directly into English. Therefore, while it may mean ‘to have sex with’ in other contexts, in this case it is much more fitting to translate it to ‘to molest’ or ‘to rape’ - two actions which are very, very different from a consenting gay couple having sex. The issue with the Sodomites is not that the angels were men, but that they literally gang-raped them. Furthermore, when the prophet Ezekiel refers to the story later in the Bible, he says that the sin of the Sodomites was lack of hospitality, and ‘not aiding the poor and needy’ despite the wealth that they had.

Therefore, in conclusion, I believe that the Christian religion doesn’t ‘condemn homosexuality’ at all. On top of all these mistranslations, you can see the reason for all the other rules in the Bible (discounting Mosaic law, since that was made obsolete when Jesus came in with his new covenant, but that’s a whole different article altogether), but other than what some Christians believe the Bible says, there isn’t anything morally wrong about being gay like there is about murdering or stealing - while you can see that those things are wrong, it doesn’t affect others at all if two people of the same sex want to have a relationship. Personally, it just doesn’t make sense that the God of the Bible, who loves everyone equally, would have any problem with people being gay, and along with the possibility of words being lost in translation (which is prevalent all across literature, not just in the Bible) and the personal biases of some translators coming into play, I find it highly unlikely that this is one of the messages preached in the Bible.