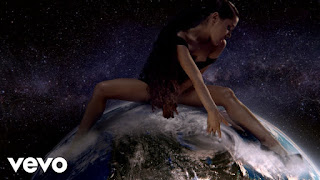 Since Ariana Grande sparked controversy in 2018, with her song “God is a woman”, discourse around a female God has resurfaced. Pioneered by eco -feminist theoligian Sallie Mcfague, with her 1982 book called, “Metaphorical theology: modes of God in religious language”, the traditional masculine concept of God came under fire.

In biblical texts, God is consistently presented as male, in all parts of the trinity. The use of traditional male language (such as “Father” and “Son”) conveys that God (an omnipotent being) should be imagined in male terms. Jesus referred to God as “Father” and taught his disciples to do the same; solidifying the approachability of God but also the imagined Gender of God. God is occasionally described in female language, such as in Isaiah where God is described as a comforting mother; the majority of gendered references to God are male. While according to the biblical texts God transcends human categories of male and female, the collective image of God is usually seen as male, across different Christian cultures this belief is usually shared. It can be argued that this focus on the male within God can lead to the abuse of the natural world and women.  Mcfague believed that a masculine God conveyed a unilateral sovereign ruler; this ruler being immutable and all powerful, arguably leads to the downfall of women and the earth. Her eco-feminist perspective allowed her to see how these two forms of abuse are interlinked and the root of said oppression could be tied with the patriarchal imagery of a male God. So, Mcfague, aswell as a plethora of other feminist theologians, expressed concern around the masculine language associated with God.

Sallie Mcfague believed that the masculine metaphor used to understand God was long outdated and to combat this she developed 3 new metaphors to replace the old ones. Each metaphor she developed corresponded to a Christian doctrine, an ethical element and a type of love. The first metaphor developed was “mother” which corresponded with: traditional title of “father”, doctrine of creation, ethical element of justice and agape love. The second being “lover”: traditional title of “son”, doctrine of salvation, ethical element of healing and Eros love. The third metaphor was “friend”: traditional title of “spirit” doctrine of eschatology, ethical element of companionship and phila love. Mcfague believed that each metaphor would allow for a more in-depth understanding of the nature of God; she theorised a new metaphor for each part of the holy trinity to arguably represent the complex nature of God. However, she also maintained that metaphors have the potential to be morphed into idols. This means that some Christians worship the metaphor that presents God as father instead of God. While all metaphors will ultimately be inferior to God’s true nature, Mcfague believes that these metaphors better encapsulate the essence of God, including his multifaceted nature.

Focusing in on the concept of God as mother, Mcfague believed that this metaphor would help theists to understand certain aspects of God's nature. Instead of a sovereign ruler (that she believed God the father conveyed) God as mother would mean that the universe is part of God or God’s womb. This would mean that any harm to God would also be harm to God. This belief that the universe is the visible part of God is known as Panentheism and Mcfague personally believed in this. The maternal image of God highlights the universes and humanity’s complete unaltered reliance on God; this puts God in the highest position possible. This would also arguably help to invert the oppression that women and the natural world face. This would be because if the universe was seen to be a part of God, then any harm to the natural world (and its inhabitants) would be direct harm to God. However, Mcfague stresses that it is vital to only imagine God in female terms instead of believing God is female. This is because the, “first refers to gender while the second refers to qualities conventionally associated with women.” Apart from the biblical inaccuracy of believing God is literally a woman, Mcfague argues that this could lead to reinforcing patriarchal stereotypes. This is because it could lead to the sentimentalizing of maternal imagery. If this was done, it would suggest that all women should naturally act as mothers and perform the traits of being self-sacrificing, loving and comforting. These qualities are arguably not “natural” to women but instead social constructs that are pushed onto women. Therefore, if God is believed to be female, these stereotypes may be strengthened, further oppressing women.

In conclusion, while Ariana Grande may have written “God is a woman” to fulfil the eco-feminist argument that Sallie Mcfague pioneered, I would argue that the gender of God is still a controversial topic. While there are some obvious merits to a female God, one can soundly argue that the gender of God should be down to what an individual theist believes will allow the deepest connection.