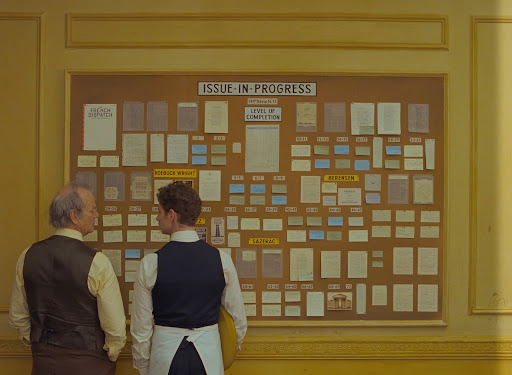 Recently I was introduced to critically-acclaimed director Wes Anderson through a trip to the cinema to watch his latest film ‘The French Dispatch’, which proved to be a completely different experience from any other visual media I had previously consumed. I was struck by the immersive world-building and distinct style of the film that immediately had an identity of its own. The film charts the stories of a fictional French literary supplement, ‘The French Dispatch’, based on the real-life New Yorker magazine during the 1950s and follows the format of an anthology of three stories. Since watching the film, I have viewed Anderson’s most successful movie, ‘The Grand Budapest Hotel’; the 2001, ‘The Royal Tenenbaums’; and found out that a favourite childhood film of mine, ‘Fantastic Mr. Fox’, was also directed by Anderson. Through watching these, I became accustomed to the unique directorial tropes which defined Anderson’s films and their separation from reality, something that contrasts with the naturalistic filmmaking most directors opt for in the 21st century.

I find that a quote from Bill Murray’s character, the chief editor in ‘The French Dispatch’, really sums up Anderson’s own approach; he repeatedly states to his writers, ‘Just try to make it sound like you wrote it that way on purpose.’ This notion reflects the Wes Anderson-isms which have become so distinct in the contemporary film climate as it appears both confident and somewhat self-deprecating. It is this contradiction that underpins the reality Anderson constructs as his directorial imprint becomes a character in the films that he makes.

An immediately obvious aspect of all of Anderson’s films is the planimetric compositions he uses to frame almost all of his shots. This rather wordy term refers to the orientation of elements of a scene as flat planes relative to the camera, meaning that characters occupy and move through flat planes within scenes parallel to the background. As they move, characters face towards, away from, or perpendicular to the camera, meaning that something known as compass-point editing is employed. This type of editing limits the camera to 90 or 180° increments, often so that it sits between characters having a conversation. In doing so, the viewer is actively inserted into the narrative as it unfolds in front of their eyes. The editing also maintains the flatness of environment / planimetric composition, which creates an absurd geometry that evokes the simple nature of childhood storytelling and fantasies. It is perhaps most useful to assess why most directors choose to not employ such compositional techniques in order to work out why Anderson does. Naturalism, when films attempt to portray a believable illusion of reality, is the predominant approach to cinema and is unachievable through flat compositions as they look and feel like constructed space. In contrast to the reality presented, no matter how unrealistic the events are in naturalism, Anderson performs the opposite, presenting realistic events through an unrealistic lens. This engineers an atmosphere unique to all of his work that is reinforced by other techniques he employs.

Another characteristic of Anderson’s films is the vivid, distinct colour palettes of each film that enhance the plastic representation of the world. Each film tends to be assigned particular colours, rendering them as dream-like microcosms of nostalgia and asserting the idiosyncratic identity of each world. As well as this, sometimes the exaggerated colours are juxtaposed with more emotional scenes, reinforcing the self-aware, sardonic nature of Anderson’s films.

This self-awareness also pervades the overarching narrative of each film, particularly clear through ‘The Grand Budapest Hotel’s’ authorial framing. It presents an author telling a story of how he came across a story, narratively expanded upon during the exposition of the film to a young girl who has read the book by the author who came across the story. This complex structure engineers a meta-narrative of stories within stories, yet Anderson manages to illustrate a cohesive sequence of events that are easy to follow as a viewer. The shift in the scale of the story one is observing is delineated by a changing aspect ratio, again, defying the conventions of naturalistic filmmaking. Other examples of this ‘meta-narrative’ exist in the magazine-like format of ‘The French Dispatch’, or the novel ‘The Royal Tenenbaums’ is fashioned around. 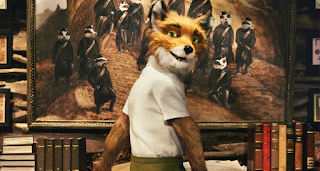 A final example of Anderson’s distinctive style exists in both his stop-motion animation feature films ‘Fantastic Mr. Fox’ and ‘The Isle of Dogs. In these, the process of filmmaking manifests itself through the fur of the animals. Anderson made the deliberate choice to use real animal fur, meaning that a subtle rippling effect is produced as the crew adjust characters for stop motion animation, leaving impressions in the fur. These impressions can be avoided by using synthetic fur, however, again, Anderson chooses to emphasise the physicality of making a film. This creates a tension between the ‘realness’ of the animal fur and the artificiality of his directing style.

Returning to ‘The French Dispatch' after researching more of Anderson’s work, I find that it exploits all of the aforementioned techniques further to form what many critics consider to be the most ‘Wes Anderson’ Wes Anderson film. The film frequently shifts aspect ratios, from colour to black and white and is underpinned by meticulous planimetric compositions. Narrative-wise, it is composed of three distinct sections modelled around the corresponding art, politics and food sections of the magazine, with Anderson going so far as to define the page numbers in the title cards which appear between stories. Ultimately, it is simply a great film to just look at and admire the care put into each frame, with the added bonus of being a whole lot of fun too.