Spinozism: A Philosophy For Survival

Posted by Portsmouth Point on November 24, 2021

Based on a talk given by James Burkinshaw to Philosophy Society on November 24th, 2021 (Baruch Spinoza's 389th birthday). 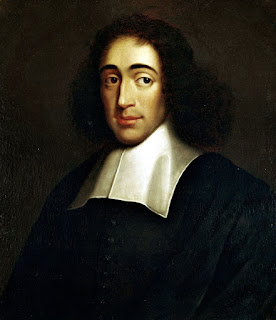 On 24th November, 1632, Baruch Spinoza was born into a Jewish family of merchants, in Amsterdam. A gifted student, he was predicted to have a glittering career ahead of him as a rabbi or scholar. However, in 1656, aged 24, he was excommunicated by the synagogues in Amsterdam for denying the divine origin of Hebrew scripture and the immortality of the soul.
To support himself financially, Spinoza became a lens grinder - eventually working with the Huygens brothers in pioneering microscope/telescope lens technology.  However, he continued to study and to write about religious, philosophical and political issues. In 1670, he published Theological-Political Treatise, in support of the secular and democratic reforms of the De Witt brothers.
It was immediately condemned as ‘a book forged in Hell by the Devil himself’ by the regime of Stadtholder William of Orange. Spinoza was forced to flee from Amsterdam to the Hague. Two years later, the de Witt brothers were brutally murdered by the Orange faction and Spinoza himself spent the rest of his life under threat of similar treatment, which makes his continued work on his ground-breaking philosophical master-work, Ethics, so extraordinary.

In 1674, Baruch Spinoza died, aged only 44, from tuberculosis probably caused by inhalation of glass dust resulting from his work as a lens-grinder. Three years later, Ethics was published posthumously and remained proscribed and condemned in many countries for well over a century. However, today, Spinoza is increasingly seen as a visionary, far ahead of his time, with much to teach us about subjects from ecology to psychology, democracy to diversity.

Below, I have attempted to summarise some key areas of Spinoza's thought, and the ways in which he anticipates later thinkers.

Spinoza was excommunicated by the Amsterdam synagogue because of his pioneering critical study of Jewish and Christian scripture, which he argued were not divinely inspired but flawed and contradictory texts. His critique included the observation that these religions and their texts were anthropocentric, portraying God in humanity’s image.Spinoza had a proto-Darwinian view that humans are part of the substance of nature. So, too, is God. In fact, God is identical with the Universe, not external to/separate from it - God is immanent, not transcendent. If God is nature, and if a miracle is God acting contrary to nature, that is logically impossible. Therefore, ‘miracles’ are just events whose cause we don’t yet understand. For Spinoza, separating ourselves from nature is “not an act of transcendence, but a malfunction - leading ultimately to  extinction” (Freya Mathews). He thus anticipates Gaia Theory and the Deep Ecology movement.

As a monist, Spinoza argues (against Descartes’ dualist system) that everything is one substance, which can be understood as the cause of itself, without reference to anything external. There is no division in substance; there are only modes of substance. As we are substantively identical with the universe, our ‘identity’ is not stable but a result of a constant exchange of energy with the environment, our self-realisation unable to exist independently of our substantive environment. Therefore, we are not in a state of  Being, but of Becoming. Individuality does not imply discreteness from our environment but connection to it. For him, it is impossible to conceive of mental activity without a material context; they are part of a single entity.

Spinoza anticipated the insights of neuroscience in his refusal to separate mind and body, but also his belief in the important role  emotion plays in rational behaviour and human understanding. Spinoza was also prescient in understanding that, while human beings are fundamentally subject to emotions and “vaguely conscious of their desires, they are unaware of the causes by which these desires are determined.” He foreshadows the psychoanalytical writings of Sigmund Freud and the work of other modern psychologists in arguing that, in submitting to our emotions, we do not have power over ourselves. To avoid slavery to our immediate passions, we need to look within ourselves and learn about the whole range of feelings, passions, appetites and emotions that can cause pleasure and pain, working out how to fulfill each properly in such a way as to avoid conflict between them. For Spinoza, to be free is to have adequate knowledge and live according to that knowledge.

For Spinoza, the soul, like the mind, is part of the shared substance. Einstein argued that "Spinoza is the greatest of modern philosophers, because he is the first who deals with the soul and the body as one, not as two separate things." For Spinoza, the essence of the soul is the capacity for thought. Rational thought about our self as connected with the rest of the universe gives us a sense of essential being. In this state of heightened awareness, in which object is unified with mind in the act of contemplation, the soul is united with the universe, in a relationship predicated not on worship but wonder.  This intellectual love is unreciprocated because Spinoza’s God (the universe) has neither intelligence, nor feeling, nor will: “He who loves God cannot strive that God should love him in return.” Spinoza’s idea of an impersonal God identified with the universe itself mirrors Eastern philosophical traditions, such as the Vedanta. But they also anticipate the almost mystical way many modern physicists, from Oppenheimer to Einstein, have viewed the universe. Einstein wrote, "I believe in Spinoza's god, who reveals himself in the lawful harmony of the world, not in a God who concerns himself with the fate and the doings of mankind." The eighteenth century writer, Novalis, described Spinoza as a "god-intoxicated" philosopher.

If God is indistinguishable from the world and universe, there are no transcendent or objective rules or standards by which moral judgements can be made as to an action being good or evil. However, Spinoza argues that, even if good and evil are arbitrary and subjective terms, we need to retain them because we need to form for ourselves a model of human nature to which we can aspire. Morality is still desirable, definable and achievable. We should use the word “good” for the ways in which we conform to that model and the word “evil” for everything that hinders us from conforming to it. Evil is to be avoided not because it is punished by God but because it is at variance with a virtuous life. To believe that there’s an eternal heaven in which you’ll be rewarded, or an eternal hell where you’ll be punished means your life in this world will be governed by irrational hopes and fears for what’s going to happen in the next: that’s a life of bondage and servitude because it is not based upon the knowledge that brings freedom.

For Spinoza, morality makes no sense unless human beings can make free choices. People should be free to think what they want and say what they think. We need freedom of speech and thought, as well as freedom of worship (or non-worship). Thus our political institutions need to be democratic and pluralist. This is what led to his treatise being labelled a “book forged in Hell by the Devil himself” by 17th century authoritarians and autocrats. Furthermore, people can enjoy truer freedom in a society guided by common decisions than they can in solitude; the mind is more liable to perceive things adequately the more it shares those ideas with others. Knowledge is not to be withheld. Education is at the heart of freedom.  By including among ‘others’ animals and plants, Spinoza opens up potential for a more bio-diverse, ecocentric perspective.

In trying to explain good and evil, Spinoza argues: “The perfection of things should not be judged by their own standards or human standards. It may be beyond our understanding it may be harmful to humans but useful to the universe.” With a sense of intellectual humility, this opens up an ecocentric alternative to an anthropocentric view of the universe. Although attacked in his own time and afterwards as a ‘pantheist’, Spinoza does not worship nature, but simply counters Francis Bacon’s dictum, ‘knowledge is power’, with the view that ‘understanding is happiness’. Consequently, Spinoza offers a way to treat nature not with domination and exploitation but respect and mutuality. Thus, his philosophy is not a matter of passive contemplation but of active survival.