Hallyu: the Wave of Korea’s Influence on Global Pop Culture.

Posted by Portsmouth Point on November 21, 2021 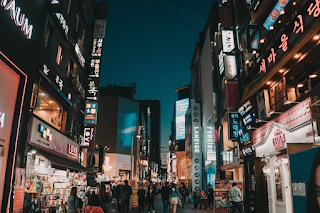 Have you watched Squid Game or Parasite yet? Maybe heard Twice’s latest hit “The Feels” on TikTok, or shopped at online marketplaces like Yesstyle? These are all examples of “Hallyu”, literally “Korean wave”; the globalisation of Korean culture.

Since the 90s, there has been a “deliberate government initiative” to push Korean influence on a global scale in an effort to maximise Korea’s “soft power” - i.e giving it cultural sway. There has been a Western fascination with Asian entertainment for years: just look at the popularity of Japanese anime and manga, or the almost universal popularity of Studio Ghibli. To a lesser extent, some other East Asian countries have permeated the market. Taiwanese bubble tea is now a staple in any British town (there are eight dedicated shops in Portsmouth alone), and Chinese dramas run abound on Netflix.

Arguably, the reason that Hallyu has exploded in recent years can be attributed to apps like Twitter or TikTok. Their global nature means that anyone can take part in the conversation or create content, and they allow for direct interaction between celebrities and fans. This is especially true in the rise of Korean pop music (Kpop) - on Twitter, fandoms are dedicated and organised, in surprising ways. Last year during the Black Lives Matter movement for instance, right-wing hashtags such as #whitelivesmatter were flooded with “fancams” (fan-made videos of performances focusing on a single band member), rendering them useless. Police apps like iWatch Dallas, intended for users to send in tips on protestors that could put them in danger of being arrested and subject to police brutality, were similarly jammed with these videos until the apps were taken down for technical issues. On TikTok, certain songs can take off and become viral. One video using the song gets popular, then it spreads to the mainstream as other users use it to try and please the Algorithm and get their videos to the For You page; this phenomenon has been seen with songs like BTS’s “Butter” and the aforementioned “The Feels” by Twice.

Another avenue that has taken off is film and media. Parasite (2019) won four Academy Awards, and was the first non-English-language film to take home Best Picture. Minari (2020) is another critically acclaimed hit, earning the Golden Globe for best foreign language film.  Squid Game is the most watched original Netflix series of all time, reaching 111 million fans. K-dramas such as It’s okay not to be okay, Love alarm, and Crash landing on you are also incredibly popular.

There are a number of up and coming areas that promise to balloon in future. Nigella Lawson’s enthusiastic endorsement of gochujang (a red, spicy, umami paste) picked up an existing trend: Waitrose reports that sales are up 49% year on year. Korean barbecue restaurants, where you cook meat at an in-built grill at your table, are now scattered throughout the West. Korean fashion (K-fashion) is on the rise with popular indie brand Cider even having a dedicated kpop section. Fans seek to emulate the street-style looks of kpop idols in music videos and performances. Complex multi-step Korean skincare routines are everywhere online.

This cultural phenomenon has seeped its way into the global landscape, as Gen Z seeks out diversity. The focus is now on a wider range of perspectives and cultures, which can only be beneficial.

The Drum (2021), Hallyu to the world: the incredible rise of Korean culture, available at https://www.thedrum.com/news/2021/10/27/hallyu-the-world-the-incredible-rise-korean-culture (accessed Nov ‘21)