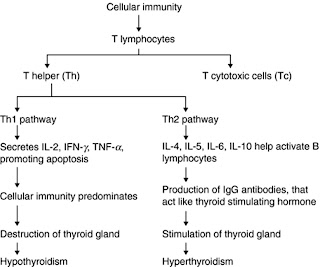 Autoimmune thyroid diseases are influenced by both environmental and genetic factors and has been shown to occur in a two-stage process. Stage one involves the increased appearance of antigen presenting cells that present thyroid autoantigens to T-helper cells (Th) and stage two involves the production of Th and T-cytotoxic cells (Tc) that produce an immune response against the presented autoantigen. There are two types of T-helper cells (Th1 and Th2) which produce different cytokines, and this initial cytokine profile (the type of cytokine that is pre-dominant upon infiltration of the thyroid parenchyma) determines the different clinical outcomes of autoimmune thyroid diseases.

Recent literature shed light on the epigenetic mechanisms involved in the pathogenesis of AITD, including DNA methylation, histone modifications and lncRNA. A genome-wide DNA study observed lower levels of methylation in autoimmune thyroid disease patients, which may result in overexpressed genes important for an immune function or for the activation of immune cells. This may lead to an explanation of the increase in numbers of antigen presenting cells when autoimmune thyroid diseases (AITDs) develop. Via epigenetic profiling in T-helper and T-cytotoxic cells from AITD patients with hyperthyroidism, hypermethylated gene loci of ICAM1, CD247, and CTLA4 associated with T cell receptor signalling confirmed that methylation is involved in the development of AITD. However, DNA hypomethylation levels and susceptibility to AITDs have been correlated to the presence of genetic polymorphisms of DNA methylation-regulatory genes.

Histone modifications also play a key role in AITD, but the exact mechanism in modulating immune tolerance in AITD is still not fully known. In a study involving AITD patients with hyperthyroidism, Th and Tc cells presented higher levels of H3K4me3 and H3K27Ac (both associated with increased transcription of a nearby gene) histone marks. As previously seen for DNA methylation, genetic polymorphism of histone-modifying genes may result in various malfunctions, and/or other further aberrant histone modifications.

MicroRNAs (miRNA) actively modulate the differentiation or activation of immune cells and immune response. Two of the most studied miRNA are miR-155-5p and miR-146a-5p, whose overexpression is believed to break immune tolerance, thus fostering the development of autoimmune diseases. For example, AITD patients exhibit lower levels of miR-155-5p and miR-146a-5p in the thyroid tissues. Another epigenetic process called X chromosome inactivation (XCI) has also been discussed in correlation with AITD. X chromosomes are randomly inactivated in females resulting in transcriptional silencing of one of the X chromosomes. AITDs are more often observed in females, confirming the compelling role of XCI in these autoimmune disorders.

The link between epigenetics and autoimmunity is apparent, although, more extensive studies are required to better understand the influence of these modifications in AITD and other autoimmune disorders.