Posted by Portsmouth Point on November 12, 2021 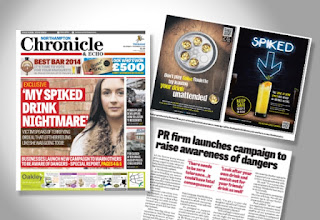 Why is drink spiking currently such a prevalent issue in the U.K.? In recent months drink spiking is a topic that has been discussed multiple times on the news. It can be argued that drink spiking has never been as dangerous as it is now.

Drink spiking is often defined as putting alcohol or drugs into someone’s drink without their knowledge or permission. Spiking a drink is an illegal offence in the United Kingdom and the maximum sentence if found guilty is 10 years in prison. If a robbery or sexual assault has taken place, the sentence will be even higher. Drink spiking is, however, not a new phenomenon which leads us to the question, why is it so relevant right now?

It is so dangerous currently due to the recent stories that have been emerging where women are spiked by injections when they are on nights out. Women have been injected by needles containing drugs when they are out with their friends causing them to become extremely unwell. Often these drugs cause individuals to lose feeling in certain parts of their body, become dizzy and disoriented and they are also at an increased risk of becoming unconscious. These factors all make an individual a much easier target for sexual assault or another criminal offence. The use of needles highlights how serious drink spiking is becoming. For women in nightclubs or bars this is a threat that they simply cannot protect themselves from. No one should not feel safe when going out due to the fear that they could get injected with an illegal substance often carried in an HIV needle which poses an increased risk. For those who have been spiked by a needle, organisations like Drink Aware are giving people advice on what to do when they have been spiked. This includes telling someone immediately that you think you may have been spiked before you lose consciousness or mobility. Encouraging the wound to bleed ideally by holding it under running water before placing a plaster over it and going to your nearest emergency unit for testing.

Women across the country have been urging nightclubs and bars to do something about the increased rate of spiking as many individuals simply do not feel safe enough to go out. Since late October many women at mainstream universities in the country have been boycotting nightclubs and bars as part of the “Girls Night In” protests. The groups aim to highlight the problem of drink spiking as well as women’s safety in general. A second year student at Leeds University who co-founded her branch of the campaign says that the boycott had been a success due to the fact that local clubs have been listening to their concerns. She claims that, “they’ve responded to the loss of economic revenue” and is encouraging clubs to train security and bar staff to spot the signs of spiking. As well as this during this week, MPs debated whether or not bag searches at night clubs should be made law after a petition calling for it to be mandatory reached over 100,000 signatures. Although it is currently not a legal requirement for bag searches to take place after the recent increase in drink spiking most night-time venues are focusing on doing extra searching as one of the many ways to try and combat this issue. These measures include enhancing CCTV, security and being more vigilant when training staff.

The NPCC said there have been 198 confirmed reports of drink spiking in September and October across England, Scotland, Wales and Northern Ireland, plus 24 reports of some form of injection. The likelihood is that there are many more cases than this as the majority of individuals do not report their experience to the police due to the stigma surrounding drink spiking. Many women feel that when they talk about their experience they often don’t receive sympathy and guidance and are instead blamed and seen as irresponsible. Although it is positive that night clubs and bars are beginning to recognise this issue and trying to increase security in my opinion, it is not the responsibility of women to stop themselves from being injected or their drink being spiked. Surely the blame from this drink spiking epidemic lies with the individuals who are spiking other’s drinks or injecting people with needles. I feel that the efforts of the clubs and the police force needs to be more focused on preventing this from happening rather than trying to help support those when it happens. Drink spiking is a choice by someone else to purposely try and injure another and those responsible must face the consequences.