The Year 13 Geographers were able to ask an attendee of COP26 anything about the event and climate change via Microsoft Teams last Friday. Professor Dave Waltham works in the Department of Earth Sciences at Royal Holloway, University of London (RHUL), although he previously worked in the oil industry modelling the health of coral reefs. His attendance at COP26 was, however, more related to his involvement in the Citizens Climate Lobby and he is an advocate of quiet lobbying, “working with the democracy we’ve got”. Pupils asked a range of questions, including about coral reef health and effective climate change mitigation. Some interesting yet sobering answers included that at 2°C all of the coral reefs would bleach within a couple of weeks, and an estimated 40 billion tonnes of carbon dioxide are currently being produced globally each year. Please find below the questions which the pupils asked to Professor Waltham and a summary of his responses:

Do you think Extinction Rebellion’s approach to changing legislation surrounding the climate was the most effective method for...? 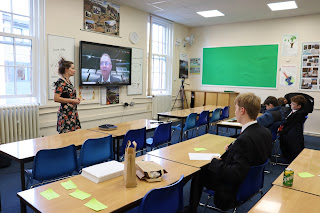 Professor Waltham believed that XR were particularly effective in 2018 when Greta Thunberg was prominent in the news, as collectively they raised awareness for the public with regards to climate change and its impending effects if action was not taken. However, in the present day he believed that a more constructive, ‘gentler’, approach to change would be more useful; this involves catering to the democracy we have as history has shown it to be inflexible. An example of this approach is the group he is a member of, ‘Citizens Climate Lobby’, who brought him to COP26 and focus on a grassroots approach to changing policies through letters etc. On their website, CCL state that they do not protest or do petitions, rather they focus on encouraging members to befriend their local MPs, giving talks to people, and using the media to communicate messages. There are arguments for the contrasting approaches of XR and CCL, XR being considerably more popular in the media and CCL appearing to polarise less of the general population, so it is up to you which approach you deem most effective.

Is holding the COP26 summit in person in Glasgow the most sustainable way of running this event, given its focus on climate change? 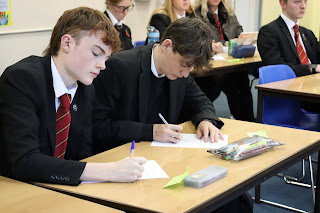 Recently in the news a light was shone on the fact that Boris Johnson had flown to Glasgow. It has also been reported that the ‘principal partners’ of the event, like Unilever and Sainsbury's, had a combined carbon footprint of 350 million tonnes in 2020 (this is more than the UK made in the same time period). Additionally world leaders and accompanying parties had flown into Glasgow creating several tonnes of carbon dioxide and other pollutants. When asked about this, Professor Waltham pointed out that the event has the aim (amongst many others) to reduce the tonnes of pollutants emitted across the globe, if the event is as successful as many of us hope it will be, the tonnes of pollution emitted to attend COP26 will be insignificant compared to the amount that will be prevented. However this is reliant on countries meeting targets and implementing policies set out during the COP26 conferences.

Are you concerned by China’s inability to state how it plans to achieve ‘carbon neutrality’ and is this term the same as net zero?

Asking whether he was concerned by China’s inability to state how it will achieve its so-called ‘carbon neutrality’ and what this means, Professor Waltham replied that carbon neutrality is an alternative to net zero but that it is not exactly comparable. Net zero means actively working to reduce carbon emissions whereas carbon neutrality just means not further increasing emissions. Professor Waltham also noted that in 2023, there will be a global stocktake to assess each country’s climate progress. This will allow other COP attendees to see how China is approaching its targets and the actions it is taking. If these actions are not enough, and China’s ‘carbon neutrality’ is insufficient, then actions can be taken to deal with this.

What is the most effective way in which we can target the reduction of greenhouse gas emissions? Professor Waltham proposed that the most crucial area to target is the methane (CH4) emissions due to their high potency (25x more than CO2), meaning they absorb and re-radiate a lot more IR-radiation and therefore have a greater contribution to the greenhouse effect and global warming. He also mentioned the importance of switching to renewable energy sources along with dramatically reducing the burning of fossil fuels such as coal, oil and gas. He told us that this would be an easier transition in more developed countries, than in less developed countries because they have more money and resources in order to make this switch. 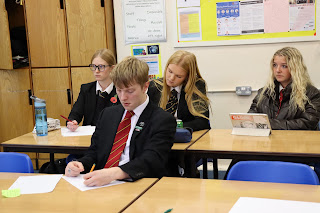 Do you think the zero - deforestation pledge is realistic? Professor Waltham replied to the question saying that it is something that has been previously attempted before by many countries and that getting them to sign the pledge is easy. However, making countries stick to the pledge is the hardest thing about it. The countries need to be pressured into sticking to the pledge otherwise they won't.

If countries fail to meet their pledges, will they be punished? Professor Waltham explained that although some countries will only submit a vague plan and then fail to complete it, they won't be fined or sanctioned. Instead, the government failing to meet its promises may be punished by its voters. Many countries will follow through with their plans, due to peer pressure, the desire to save face, the profit motive, and the dynamics of capitalism.

Will the impact of the international transport of activists and world leaders to the conference actually mean the conference has a globally negative impact on the climate crisis? Many world leaders arrived at the conference in private jets and then drove from the airport in combustion cars. With over 30,000 visitors attending the event, a huge carbon footprint will be created getting there as well as returning home. Although the conference is working towards limiting warming, is a huge conference the best way to go about it?

Does the phrase net-zero have the same meaning to all countries? The answer Professor Waltham gave me was in short “no”, he explained that it required every country to do as much as they can and that due to aspects of development or access to new technology this may vary country to country. The dictionary definition refers to the balance of carbon emissions with the removal of carbon from the atmosphere; however Professor Waltham highlighted the fact that this is not possible for all countries.

Why aren’t governments treating climate change like COVID?. I feel like governments aren’t addressing this with any huge concern due to the fact that it isn’t affecting everyone greatly yet. Most statistics state what it will be like in the future, so governments think that it isn’t a big emergency like COVID was. Therefore, they are spending less money and time thinking about it. This then trickles down into the citizens of their country, because they aren’t being led to do something meaning that the small minority of people that are trying to help won’t affect the rising of temperature. I also believe that people aren’t aware that 1 or 2 degrees can make a very large difference to our planet and are less likely to try and push the government into implementing a scheme to reduce greenhouse gas emissions. So, I think the only way the governments will start to do something is when climate change starts affecting people greatly. However, this will be too late and the changes we make then won’t change the mistakes we have made in the past.