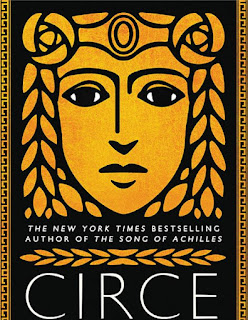 Last year I wrote an article on the recent, some could argue problematic, trend of ‘gender flipping’ books and movies (when a book or film is made with a new female version of a male story) and how there’s been a surge in books retelling Homer’s epic poems but from female perspectives. I believe there’s a distinction to be made between a powerful female retelling of a previously all male story and movies just being churned out to capitalize off a new political atmosphere. ‘A Thousand Ships’ by Natalie Haynes was one of the books I mentioned that achieves the former retelling the Trojan War from the perspective of the previously voiceless women involved and I recently decided to read ‘Circe’ by Madeline Miller.

‘Circe’ tells the story of goddess and witch Circe, most known for turning Odysseus’ men into pigs after they come to her island Aeaea and the book certainly has value as a story standalone from the original text it’s based on. All from Circe’s perspective, it chronicles events from her childhood with the gods and goddesses to her exile on Aiaia. Part of the delight of the book is seeing how she fits in with the wider story of odyssey, especially due to my lack of previous greek mythology knowledge. For example, Scylla the monster that eats sailors was a nymph that was actually turned into such a creature by Circe. Yet the impressive way Miller writes the character of Circe is so honest and real that such fantastical aspects of the story are almost second the fantastic way we can get into Circe’s head and understand her human (well not so human) motivations and perceptions of the difficult world she was born into.

Circe commits some awful deeds, from the Scylla incident to turning men to pigs, yet she constantly battles with this power but also intense compassion that the gods around her just don’t seem to possess. You get to see her grow from a timid nymph to someone confident, hardened by the hardships she has to face, most notably those at the hands of sailors who land at her island, enabling the reader to not only understand but relish in her revenge.

It is a beautifully quotable book for example, from her difficult experience of motherhood: ‘I did not go easy to motherhood. I faced it as soldiers fae their enemies, girded and braced, sword up against the coming blows. Yet all my preparations were not enough.’ To her exile commanded by her tyrannical father, ‘you threw me to the crows, but it turns out I prefer them to you.’

One of my favourite aspects of the book was the beautiful way Miller writes about themes of mortality, death and the passing of time. Throughout the story Circe repeatedly finds herself simultaneously yearning for more and less time. The mortal men she meets and loves are a constant reminder of how they will grow old and wither and she will not.

‘...there are rare moments when another soul dips near yours, as stars once a year brush the earth. Such a constellation he was to me.’

Circe is continually troubled by her fellow Gods’ indifference to mortal suffering, setting her apart from those around her. And yet while she first believes the inevitable end of a mortal’s life awful, she slowly comes to believe that it is this inevitable end that gives meaning to life. In her experience, gods had only ever been spiteful, lacking empathy and understanding for others’ pain, due to the fact they themselves do not experience pain and death, finding entertainment instead in novelty and drama. We find, with Circe, that mortals are able to better appreciate life to its fullest due to their understanding of each others lack of time, being able to cultivate compassion and deep love for one another. The things that give life meaning- empathy, evolution and real connection- are undone by immortality. She realises, despite their eternal nature ‘gods are the opposite of death, they are more dead than anything,’ never experiencing the things that give life meaning, and never really living at all.