Are the Bargains of Black Friday Bonkers?

Posted by Portsmouth Point on November 25, 2021 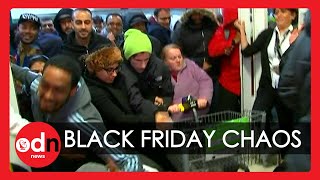 As we are ending November and slowly creeping up towards Christmas, that most wonderful time of year, one of the events that is steadily approaching and on the minds of the bargain-savvy, is Black Friday. Originating in Philadelphia and dating back to 1961, it was used by police to describe the heavy pedestrian and vehicle traffic that would occur on the day after Thanksgiving.  This period is crucial for the economy, especially for retailers selling technology, electronics and big ticket items. In the UK this year, consumers are expected to spend a total of £9.42 billion.  Of this, £3.41 billion will be spent in shops, while the rest is predicted to be spent online on the Saturday and Sunday between Black Friday and what is now called Cyber Monday, the day following the weekend of the Big One.

You see, during this time of the year, Black Friday makes me feel pressured to give into all of these ‘over-and-above’ deals that look so irresistibly astonishing that I just HAVE to buy all the things I want in time for Christmas. I mean, who doesn’t love a good deal, right? All the price tags and ‘50% OFF’ that are shoved in your face can be very overwhelming, almost forcing you to invest in something that, realistically, you might not invest in otherwise.

According to research by behavioural economists:  we’re easily influenced by the appearance of a good deal. Uma Karmarkar of Harvard Business School looked at what happens to the brains of consumers under the influence of a ‘deal’. The research was conducted by students of Stanford University who concluded that the idea of spending triggers huge amounts of blood flow to the brain, especially when the students in the trial were shown images of the price of a product and then the image of the product.  It is the perceived ‘deal’ that is the hook.

Another study mentioned by wired.com proves that a possible 1 out of 200 of the deals on Black Friday aren’t actually worth it, and the frenzy could be dwindling due to consumer behaviour. This idea of artificial scarcity makes us think that the bomb is about to hit, the item will be lost forever and I will not be able to get my hands on the new Ultrawide HD Television Screen. Black Friday is a simple exercise of consumer psychology and our fear of missing out. So before you make any outrageous and regrettable purchases at the weekend (sparkly dog coat, anyone?!) and get hooked by that exclusive deal and purchase it before the clock runs out, just stop a minute to think; is it really a bargain?