The impact of COVID-19 on the fashion industry 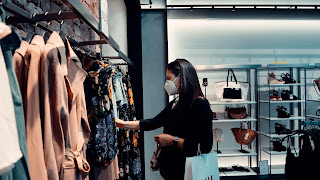 With social media rapidly becoming arguably one of the most prolific and favoured sources of news within the modern world, popular views upon huge social and environmental divides such as sustainability, racism and politics have flowered to the surface of mainstream media. With the relatively new addition of COVID-19 to our daily lives, social media itself has become even more prevalent in bringing worldwide change and, worryingly often, fake news to our online lives. Seemingly endless articles and posts regarding what, at first glance, seems to be relevant information on the illness have flooded our screens. March 2020 brought much of humanity’s world to a standstill; no toilet paper in our shops, no hand sanitizer, no PPE. The £2 trillion worldwide fashion industry, of course, was not exempt from the sudden, damaging and detrimental effects that the COVID pandemic projected upon the world. Right as the disease was starting to take hold in Italy, at the start of the pandemic, the country was in the midst of one of the most prestigious fashion-related events in the world: Milan Fashion Week. The sudden and intense panic that rapidly ensued as a result of the pandemic, which we thought at the time was a seemingly world-ending, armageddon like threat, resulted in mass change that has immensely impacted, both positively and negatively, the fashion industry as a whole.

Although Milan Fashion week itself was the starting point for the downfall that ensued, hundreds of other fashion related events, whether big or small, were additionally affected and postponed until a time in which we had COVID as a whole under control which, at the time, seemed to be so far into the future that is was simply unimaginable. However, although on the surface this postponing seemed just like an inconvenience and annoyance for fashion lovers, it has resulted in hidden scars within the economical side of the industry, that left it as a whole extremely precarious. Due to the cancellation of £2.26 billion worth of orders that contained fabrics, clothes and shoes, suppliers in Bangladesh have reported that over 70% of their workers were unable to provide for their families. Charities such as Amnesty International have warned that the continuation of this devastating deprivation could very easily result in a catastrophic humanitarian crisis. As around 93% of the companies that are supplied by manufacturing plants in Asia are fast fashion, cheaper brands that already do not pay their employees a fair living wage, this critical position that these underrated and overlooked workers have been placed in is particularly life-threatening. Typically, in the time between late winter and spring, we are preparing to establish our aspirations for summer fashion and are beginning to influence the trends that arise as the heat begins to come around. However, during the pandemic, particularly around March 2020 when the British lockdown was first introduced, what would normally be a peak time in which clothing sales figures skyrocket each year, our consumption was down a mammoth 34% from the yearly average. This immense lack of money spending and shopping for clothes further intensified the terrifying circumstances that thousands of workers were left in, and many still are.

Although all these statistics may suggest that the fashion industry and the situation of the workers who depend on it to survive is beyond repair, thankfully, there is hope! Multiple influential luxury fashion houses such as Prada, Dolce & Gabbana and Versace have donated money, aid and intensive care related machines to some of the countries that have struggled significantly with the aftermath of the Covid-19 pandemic such as China, Italy and India. In addition to assuring the fashion community that their companies have come out of the pandemic relatively unscathed and have committed themselves to supporting upcoming designers, struggling brands and the scarred world as a whole. Additionally, although many of us do have an underlying  love for cheap, ultra fast fashion brands such as Shein and Romwe, the inclusion of more sustainable, longer-lasting fashion is most definitely for the better. Covid has forced the clothes-buying community, which includes the majority of humanity, to reevaluate the way in which we buy clothes and how we treat them after the trends are over. Charity shops and vintage clothing stores themselves have become significantly more prominent in the clothing industry, resulting in bigger, more well known brands such as ASOS, Urban Outfitters and Zara to introduce pre-loved clothes sections to their companies. Throughout the lockdown, over 33 million people worldwide bought or donated second-hand clothing for the first time in an attempt to lessen carbon emissions and the amount of almost all new garments that go into landfill, suggesting that people are willing to change their views on fashion and buying new clothes for the better.

So, after all the disruption that has happened over the past year and a half you may be asking: what will the future of fashion look like for us? Thankfully, despite the devastating economical effects that Covid itself has had upon the fashion industry it is predicted that we will bounce back to be stronger than ever. Sustainability in the industry has also been on the rise as a result of the pandemic, with younger generations becoming much more interested and passionate about the effects that mass fast fashion could have. Furthermore, in the future, digital fashion shows and online fashion could be seen as the new normal. Many designers and fashion houses such as Hanifa and Versace were forced early on in the pandemic to alter their plans on presenting their garments through cat walks, and instead utilised the innovative technology that has recently become available to us to exhibit their garments. Digital fashion shows and online presentations posed multitudes of opportunities for the fashion industry, both high class and fast fashion, to reconsider the arguably rapacious and gluttonous approach that we currently have to how we consume collections whilst also allowing more people to be more involved and educated in their fashion choices.