Secularism in France: Is it Really the Way to Go? 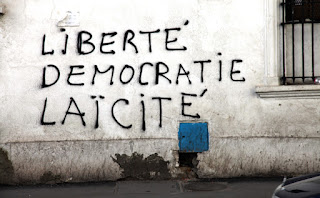 Secularism, otherwise known as “laïcité” in French terms, is what is commonly known as the separation of the state from the church but this concept extends itself unto other religious institutions. However, in France, their interpretation of secularism goes beyond one’s predisposed idea of what it is to be a secularist state (certainly mine at least). It is a core and highly valued aspect of French society, so highly valued in fact, laïcité is listed as one of the principles within the French Constitution.  In Article 1 of the French Constitution of 1958, it is declared, "La France est une Republique indivisible, laique, democratique et sociale. Elle assure l'egalite devant la loi des tous les citoyens sans distinction d'origine, de race ou de religion. Elle respecte toutes les croyances", translating to: "France is an indivisible, secular, democratic and social Republic. It shall ensure the equality, before the law, of all citizens without distinction of origin, race or religion. (France) respects all beliefs." Essentially, the French government proposes the idea of equality through the absence of signifying one's background, race or religion, with particular emphasis on religion in regards to the topic of this blog. The aim is to achieve, as the French government website claims, "peace co-existence" and that is done through "not favour(ing) any one religion". From a theoretical position, secularism appears to be a wonderful way to provide citizens their right to be free from religious imposition in the country; however, one must consider its practical application and in regards to this there is evidence showing that secularism, in reality, does not promote "peaceful co-existence" but, rather, the opposite, especially concerning Muslims living in France. Has the idea of promoting individual liberty ironically distorted itself to the constraining one’s right to freedom of self expression?

There is evidence to suggest that this is the case. Although the secular laws apply to all religions, it can be argued certain laws affect Muslims to a greater extent, in particular Muslim women. To provide some basic context, the wearing of religious symbols (in public institutions) for example, the Christian cross, is prohibited and those that offend against this law must pay a fine and/or partake in citizenship education. However, the 2011 ban on face covering veils and the recent French Senate's vote to ban anyone under 18 from wearing the garment in public disproportionately impacted and is still impacting Muslim women.The argument for this was that the veil or scarf is considered a symbol of Islamic belonging and women that choose to wear it in public spaces display their association to the Islamic community which harms the union of the French Republic and undermines its secular values. This poses as a problem to Muslim women though because, there is the general consensus by Islamic scholars that it is a religious obligation for women to show modesty and Islamic cultures have interpreted this through the wearing of the hijab or niqab. So, as one can imagine this ban being implemented provoked a large amount of outrage and sparked controversy. Protests all over France started in retaliation and a slogan “Hands off my Hijab” went viral all over social media platforms such as Instagram, TikTok and Twitter. Rawdah Mohamad, who initiated a trending campaign, from her viral selfie that pictured her hand with the words “hands off my hijab” written on it, told the Guardian that the proposed legislation "stems from discrimination and deeply rooted stereotypes against Muslim women". This legislation is not considered to just be the universal application of religious symbol prohibition but rather the policing of women's bodies and their right to self expression. The French government has been accused of singling out Muslim girls and women, essentially telling them that their religious culture is wrong.

The clash between the forbidding of public display of religious symbols and religious practice is what has caused outrage and offence to the Islamic community in particular. Secularism, as a theoretical idea, seem to provide many positives, but France's application of the concept has evidence to suggest that it is not a practical method or, at least, it has been implemented incorrectly by the national government. For example, the many protests against the French government contradict the notion of "peaceful co-existence" that they believed would be achieved through their way of approaching secularism. It is highly unlikely that secularism will be completely disposed of because it is such a core value in French society. The French Revolution, the major event that triggered its introduction, in itself makes one realise the importance of individual liberty and dangers of totalitarianism. However, there are certainly considerations to be made to avoid the equally dangerous deprivation of self expression, particularly in regards to religion.