Thirty years ago, a legend entered Formula 1. Debuting at the tender age of twenty-two years old, he competed for the first time with the Jordan-Ford F1 team at the infamous Spa-Francorchamps in 1991. Qualifying 7th, he stunned the paddock and from that point on, a star was born.

When deciding what to write my article about, I looked at numerous hobbies and interests I had, one of which being a recent fascination with Formula 1. And with this fascination came a need for more knowledge, and so I decided to indulge in the recently released Schumacher, a documentary on the legendary Michael Schumacher. There are no spoilers or anything of that nature, however I will touch upon some of the moments that I think show why this documentary is absolutely brilliant in its depiction of the 7 time Championship winner.

The documentary itself is perfect in its depiction of the life of one of motorsport's most prestigious figures, particularly in relation to his racing and mindset, which I find most interesting. Whether it be the opening scene (and closing scene) of the Monaco GP in 2001, in which Schumacher is throwing his car around the perilous Monaco track, or the Imola GP in 1994, where racing lost the beloved Ayrton Senna in his bid to fend off a teenage Schumacher, this documentary highlights not just the achievements of his glory days, but also the struggles that occurred throughout his career. In my mind, this is vastly more entertaining, and really begins to humanise the idol that many did and still do look up to. 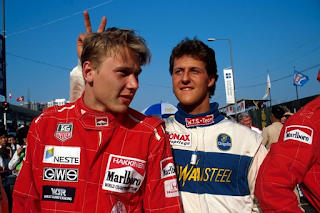 Another topic the documentary picks up on well is the relationship between Schumacher’s main rival at his pinnacle, that rival being Mika Hakkinen in the  Mclaren (pictured to the right is the man himself, 2 time World Drivers Championship winner).

Numerous times, both drivers have spoken out about their liking and mutual respect for one another, and the documentary does well to cement this relationship without presenting it too naively. Mika does make an appearance within the Whilst having their fair share of incidents, such as the Belgium GP in 2000, both drivers were happy to battle it out on track with each other. Bearing in mind the danger associated with F1 at the time, the competition between drivers is amplified tenfold. Yet both drivers found the time to set aside their differences off track, and it is this relationship that I believe shows the courage these drivers had, and continue to have today. 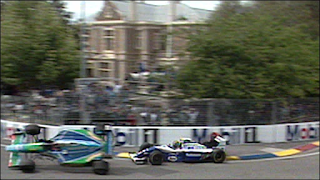 What I would like to criticise, as many people have, is the documentary’s coverage of many of his infamous moments, and the way that the documentary glossed over many of these events. These are no minor events, with the images to the left and centre showing his collisions with Damon Hill and Jacques Villeneuve (Schumacher in the green and red cars respectively). 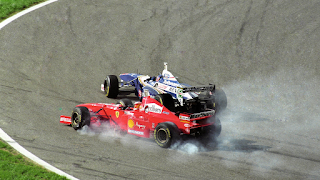 Both collisions have been etched onto the history pages of F1, with the collision with Damon Hill in 1994 winning Schumacher the series, and years later in 1997 ending Schumacher’s title run, although both collisions have been proven beyond reasonable doubt to be Schumacher’s fault entirely. Yet the documentary seems to gloss over this, as if it is nothing but an unfortunate accident. As if this wasn't the reason why the community was split over Schumacher the driver and the person. As if these spectacular images were not enough to persuade about his guilt, I encourage those who are interested in the topic to search up these infamous events since it really puts this argument into perspective.

With all this said, I highly recommend this documentary. Despite its flaws in terms of bias, it gives an unparalleled insight into not just Schumacher as a man and driver, but of racing at the time and the changes that have occurred in the past 25 years since it is set. Paired with this is a superb soundtrack, and sublime cinematography that highlights and adds to the narratives that are occurring on the screen.

Finally, this documentary makes for a memorable watch for motorsport and non-motorsport fans alike, and I would highly recommend it to anyone with time to spare!