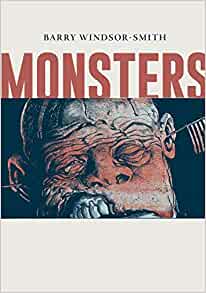 35 years in the making, Barry Windsor-Smith's Monsters is a dark tale that delves into the past and tragic fate of the young protagonist, Bobby Bailey. Originally appearing as WW2 based homage to Shelley's Frankenstein, Windsor-Smith's tale later delves into areas of domestic abuse, military corruption and paranormal powers (that reflect those seen in Stephen King's The Shining). To provide a short summary, Monsters is ultimately a story about the life of Bobby Bailey (starting with his tragic transformation into a monster) and then later exploring his past and the events that led to his tragic downfall. Containing a small roster of fleshed out characters (including a crazed Nazi Scientist, an abusive father who is haunted by the Nazi Ghosts of WW2 and a pitiful mother who wants to be loved), Windsor-Smith's 366 page mammoth of a tale contains a variety of twists and turns that actively keep the story developing and changing.

I had high hopes for this graphic novel. Online forums had been creating an immense amount of hype for this novel (given the immense creation time) and I couldn't wait to delve in and read this story that I had been hearing and seeing so much about. However, I was met with a story that seemed lost and messy. Despite starting off strong as a tale of WW2 Nazi-Science gone wrong, the story soon devolved into a narrative about psychic powers, domestic abuse and the paranormal. While the different elements and surprises certainly made for an entertaining read, sometimes it felt like Windsor-Smith had simply run out of ideas and added in what he think would keep the reader interested in his story (instead of staying true to the story that he had created at the start of his graphic novel). Additionally, the book is simply too long for a single-story arc. There were points during the read where I was having to force myself to read ahead because I wanted to know how the story finished. Certain plot points seemed either too fleshed-out or completely unbelievable and I just lost interest in the story - only finishing it because I not only bought the novel, but also because I wanted to try and understand what had created the hype around this book.

However, the art was fantastic. With Windsor-Smith opting to illustrate his own graphic novel (and using black and white), the art complimented the moody and dark tone of the story. Despite some panels being either a little confusing or being a little barren of detail, the art and style was one of the highlights of this book for me. Either way, Monsters by Barry Windsor-Smith was not for me. Although I love any graphic novels that aren't your classic superhero content, this story seemed too messy and chaotic for me to get immersed and enjoy the story. I enjoyed it so little that I have donated it to the school library (since it was taking up space on my shelf and I knew I would not be re-reading it).

So, if Monsters sounds like your kind of story, then head up to Dr Webb and ask to borrow it. It is very much like marmite, you will either love or hate the story that Windsor-Smith has created. All I do know is that for those of you who this story appeals to, you have one hell of a story waiting for you on those shelves.