‘One Night in Miami’: a Film to Celebrate Black History.

‘Power just means a world where we’re safe to be ourselves.’ 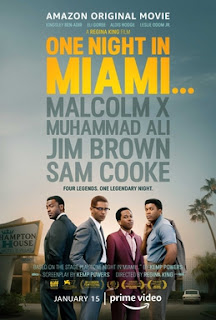 To celebrate October being Black History Month, I thought it would be pertinent to share a film which commemorates the lives and actions of four famous black men in a fictionalised meeting on the night of February 25 1964.

‘One Night in Miami’ is based on a stage play by Kemp Powers, who also wrote the script for the movie, and is actress Regina King’s fantastic directorial debut. Set on the night that Cassius Clay (later Muhammad Ali) shook the world with his surprise win over Sonny Liston, Clay gathers with Malcolm X, Jim Brown and Sam Cooke in a motel in Miami where they discuss the hardships of being successful black men during the civil rights movement. The film stars Kingsley Ben-Adir as Malcolm X, Eli Goree as Cassius Clay, Aldis Hodge as Jim Brown and Leslie Odom Jr. as Sam Cooke. Regina King’s thoughtful direction compliments the powerful performances from the lead actors spectacularly. The colourful cinematography along with the glossy cars, neon lights and patterned suits really help emerge the audience into the rich 1960s Miami setting.

Kingsley Ben-Adir’s passionate monologues pay homage to Malcolm X’s charisma and credible speaking skills, every line and every facial expression delivered by him felt so raw and meaningful to me. Leslie Odom Jr. 's potent performance really captured Sam Cooke's conflicted artistic soul and it's clear that he really dove deep into the nature of the character to bring out such a touching performance of the father of soul music. Leslie also sings Sam Cooke’s legendary songs in the film, his tone and energy rang deep in my soul and, as a huge fan of Leslie’s music, I was utterly speechless every time he opened his mouth. Aldis Hodge portrays the solidity of Jim Brown’s character perfectly, who intervened in times when conflict was heavy and gave his friends support and advice when they needed it. Eli Goree shone as Cassius Clay, giving him a sparkling youthful and sensitive tone as well as staying true to Clay’s tremendous courage and confidence.

Since the film is set on one night only, most of the film is a conversation between the four, and sometimes only two of our leading men. While it would have been easy to lose the flow of the writing and allow for the dialogue to become dull and tedious, Kemp Powers never allows this to happen which is a huge credit to the foundation he created with his script being so central to the film. Every line is intentional and filled with meaning and the superb acting made it almost impossible to tear my eyes from the screen.

Regina King has given the direction an important modern, female perspective of men who define aspects of black masculinity and she has been able to draw on their humanity and remind us that successful people are still human and that they suffer and they feel all the emotions that we do, despite seeming untouchable.

The film educates audiences on not only the civil rights movement but of institutionalised racism in America that still exists today and it’s why this film was so important to have been released last year.

The film ends with a breathtaking and terrifyingly authentic rendition of Sam Cooke’s iconic song, ‘A Change Is Gonna Come’, performed by Leslie Odom Jr. himself, who poured emotion and feeling into every line. Throughout Cooke's performance, perspective cuts to Malcolm X’s family home being firebombed and we are left with heavy thoughts in our minds and beautiful music in our heads.

I was completely moved by how vulnerable the acting performances are, and how raw and real the conversations are, conversations which we still need to be having.

The film is a celebration of how far we have come but a reminder that there is still work to be done.