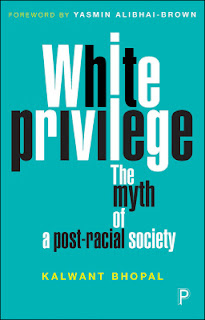 In the society of today it is terrible that racism is expected in almost every conversation and common in casual conversation. This is bad as in most cultures this considered bad and white privilege is a big problem because it is a kind of racism and if a black person is on a crime scene, most police officers would assume that the black person did it, when they didn’t, and that is unfair on them and some white people just take it for granted.


Everyday, white privilege is overlooked and not considered a problem in racism, but it is a significant problem, compared to some others. It is unfair on people of another race, as they are not as privileged as some white people, just because they are of a different race. Not only is it unfair, it is used and is described as injustice, for example, if a white person’s fingerprints and another person of another race’s fingerprints are in a crime scene, some police officers would assume that it is the other person’s crime, rather than the white person.


I want to address this problem in this document, because it is unnecessary and unfair, but it is a problem that can easily be fixed if people put their minds to it. The problem is that those that have authority don’t see it as a problem and they overlook it, thinking that it will fix itself. But it won’t. It is wrong to just overlook a major problem like this and just ignore it,it is like ignoring world hunger and po


People can fix this problem, and if they do, it will be a very good thing to happen to everyone around us on a daily basis. People of a different race will be happier, and we will all be treated as equals, the way that it was supposed to be.


I want to thank you for reading this and seeing this issue as a big problem that needs to be fixed, but it can easily be fixed, and I want you to take away from this is that it is a big issue, and I hope that people will do something about it. Thank you.

A short time after Martin Luther King’s Speech on 28th August 1963, racism became a lot less common, but it did still exist. Even now in 2020, people do treat black people differently to white people. In October 2019, a life saving operation was turned down by a white person because the doctor was black. The customer refused to have this and demanded to have a white doctor. Since the start of Brexit, white people have become a lot more violent towards black people. There have been many incidents and it is noticeable. For example, a black person was riding along on a road and he was attacked by a group of white men. They knocked him off his bike and then, when he was on the floor, they kicked him. Surely anyone who is sensible can see that this is absolutely unacceptable. So to help these sort actions improve and stop happening, we all need to work together as a school and make a difference.