Posted by Portsmouth Point on February 05, 2020
by Ruth Richmond


I spent 2 years before my 4th birthday in the US in the early 1970s; I can’t remember anything hence why photographs are so important, two of which I have included in this article. This was my parents’ 2nd stint living in the US, the first being from 1962-1969 in Manhattan where they were living in an upmarket apartment with my older brother. They were an ordinary white middle-class Scottish/Ulster family who had relocated abroad because my father, an academic, was offered a professorship at the prestigious New York theological seminary. Nothing remarkable about this, you might think. But what is so interesting is that the way my family was treated by the University was at that time was a true reflection on how white people were viewed: superior, intelligent and worthy of privilege. The only black people on the staff were cleaners. There were no black students. Their apartment in wealthy Manhattan was not only paid for by the university, but all bills were included, and they were given the ultimate privilege of having a poor black lady, from nearby Harlem, come into clean the apartment, plus the laundry and cooking, everyday except the weekends. My mum tells me (my father died 15 years ago) that she was very nice to Grace. Grace was paid poorly but worked very hard, was always polite and loved playing with my brother. She called my mum ‘Lady Richmond’ (my mum has no title, I must emphasize) and my dad ‘Sir’. She was not allowed to call them, or even know, their Christian names. She called my brother ‘master’ but was not allowed to call him by his name (Ewan). Whilst I know that my parents were respectful in their attitude towards Grace, they also admit that they saw her as a second-class citizen, something to be pitied and looked down upon, and someone who could never aspire to be equal to white people. It’s not that my parents did not support the Civil Rights’ movement, rather it was that they thought equality just would not happen in the US; white supremacy was so ingrained in the culture and they made the decision, however morally reprehensible you might find it, to remain silent.
One day my mother took my brother on a shopping trip and they walked through Harlem. Harlem was a very troubled part of New York; it was predominantly black, extremely poor, had high unemployment, and suffered riots on a daily basis. The citizens there were not used to seeing a white person, with her blond haired and blue eyed son, walking through the streets. My mum and brother were verbally abused, spat on, and called ‘honkies’ (a disparaging black term for white people). My mum was terrified and realised that she had been terribly naive thinking that she and my brother would be safe walking through this area. This is a photo taken at the time: 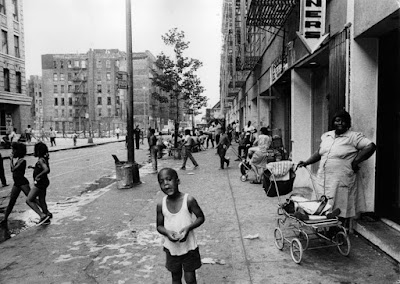 Thankfully, Mum noticed Grace standing watching from a nearby doorstep and shouted out to her. Grace pretended she had never seen her before. Mum explained later that she was hurt and surprised by Grace’s attitude, but understood why Grace acted in such a way; she would have been ostracised from this community if they saw her being ‘friendly’ to a white person. The next day, when Grace came to clean the apartment, she pretended as though the incident had never taken place, which my mum respected.
For me, it is amazing to think that my parents, one a Christian vicar and the other a committed Christian, didn’t really effectively question (or act upon) why these appalling race relations were the norm. I suppose It is easy when, from the standpoint and luxury of hindsight, that we can see the real injustice and downright racism that existed. 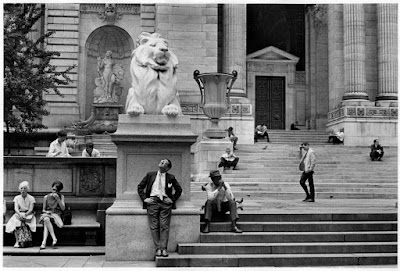 In conclusion, my parents were products of their time and culture. They were wowed by the welcome and gifts that were bestowed upon them as white so-called British colonialists. They accepted the status quo. They were not brave enough to challenge the status quo or join the growing civil rights movement. I know my mum looks back on their behaviour towards Grace and other African-American people at that time and is deeply ashamed. She can’t change the past but she has learnt from it. I don’t judge her. Why? Let Goethe have the last word:“The man with insight enough to admit his limitations comes nearest to perfection.”