Posted by Portsmouth Point on February 04, 2020
Racism in the Criminal Justice System
by James Cuthbert 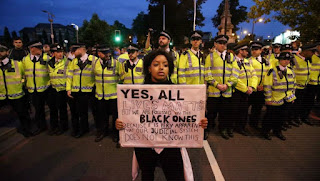 Crimes are crimes, they occur every day and it is almost impossible to prevent crime in this day and age. When a crime is committed, the people living in the area of course justice and some sort of punishment, but are the punishments always fair? Back in the 20’s  and 30’s in America, we all know that black people were treated with no respect and lynched for the smallest things, people treated them like dirt and they were shown no respect. Nowadays, we would think that things have changed, because we no longer see black people being charged for the smallest things or for bad reasons do we? In jails today, for every 100,000 people in jail, 450 of those people are ‘white’ and a surprising 2,306 of those people are ‘black’. Now, some may argue that this number is a coincidence and black people are just often committing crimes. But that’s like 5x the amount of white people and that in my opinion is no coincidence.

Another survey has found another strange coincidence in the numbers of jail time. Black people who have done the exact same crime as white people have on average been given 20% more jail time for a white man who has committed the same crime, why is this the case? We’ve now seen the polls but what do the ‘black’ men in America say about this? Over 85% of black mean say that they are not treated fairly and only 60% of white men agree? The thing is, Black men are just not being judged fairly in my opinion. Black people have the highest percentage of going to jail than any others and this has to be a coincidence. Black men are always in fear of being pulled over because black men are getting pulled over daily, for example… In Britain, black people are pulled over 9 times more than white people on average. That is obviously no coincidence because 9 times more is massive. If 100 people were pulled over one day, we are assuming based on the average, that 90 of those people are black. That’s no coincidence, and we need to stop this. If you go on YouTube and search black people being treated unfairly by the police, you will find lots of videos that you can watch just to show you the truth behind all of this. Now, What can we do about this?


There are many things that you can do to help stop this mistreatment of certain races. You need to open your eye to the world and look at everyone as equal people, because by doing that, you are not only making yourself a better person, but you are bringing the world a step closer to equality. People sometimes mistreat certain races because they feel like other people do it so it is normal, but that is completely wrong and we need to set an example. Another thing you can do is talk to people about this problem, by doing that you are spreading awareness and there are some people out there who can help too. By doing this, we can make the world a place where everyone is treated with respect and equally.

Racial profiling is the act of suspecting or targeting a person of a particular race,  nationality, or also religion on assumed characteristics, rather than individual suspicion.


This is especially seen in America, and often by the police. Many black American men feel that they have been followed in a shop by police or security personnel, including Barack Obama and Kevin Hart. The issue of racial profiling is not just limited to America, however, and is very widespread throughout the world.

This 8-minute film clip helps to raise awareness of incidents of profiling and racial inequality in the USA: