Posted by Portsmouth Point on February 06, 2020 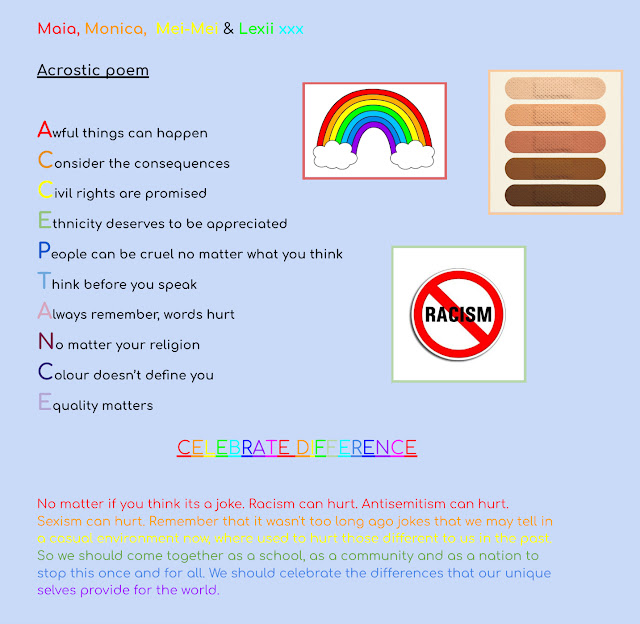 He was bullied day and night

Even though he was quite polite
He tried very hard to keep it with him
The bullying he received was grim,
But he took all of it on the chin


The taunting was relentless,
These people are the menace
Utterly merciless.


We need to celebrate,
Appreciate,
Everyone is unique.


It was the colour of his skin,
The made him feel grim.
But the he learnt to celebrate,
Appreciate
And his soul sung a joyful hymn.


We are delighted to publish the following poems by students at Kikaaya School, Uganda, to celebrate this week's theme of 'Diversity'.

In our countries,
These people may appear
Dark,white or brown

Let us join hands together and stop racial segregation
Racial Diversity brings unity, creates love
In a world where the poor sit on a table with the rich
The whites and the blacks
The Catholics, Muslims and Anglicans together
In a world full of peace and harmony.

The greatest gift in the whole world.
It brings joy to each and every one.
It promotes love and brotherhood among individuals.
Development and stability is brought about if it is in place.
It encourages peace and togetherness among different races of people.
But the worst enemy of all this is racial segregation
It is a serpent which destroys all the later.
It brings about wars in different countries.
It causes death and misery to many
Let us cut the cackle and fight racial segregation
Replace hatred in our hearts with love and peace
So that we can get to the top.

Racial segregation you are just a word.
But you have spread widely spread in the world.
Mainly brought by tribes
Which forces man to bribe
Not even thinking about the Bible
Which says man should love his neighbor as he loves himself
All this leading to troubles.

Racial segregation you are very bad
Which needs man to evade
Though it is a bitter pill to swallow
But it must be swallowed
Don’t target arrows to your fellows
Rather make peace with them
To serve your country and make the world a better place.

Segregation, the evil act
That confronts the people hearts
The destroyer of peaceful environments
War  mongers among the people in the world
Way back in the ancient times
Contributor of massive deaths
And blood shade.

Call upon the world,
Together as one
Develop the sense of closeness
Towards neighbours and the community
Distribute respect to all kinds of people
As we share the glory of diversification
Togetherness as a change of the future generations.