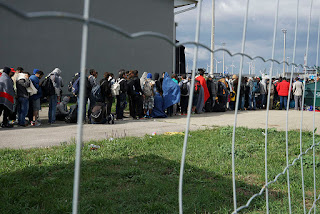 For the upcoming term, our A-level Geography class will be exploring the global process of migration. We aim to understand the reasons behind it and how it affects our modern world. So to coincide with Portsmouth Point’s celebration of Race and Diversity, as a class we have produced this article focusing on the stories of migrants to the U.K. We have researched and produced some accounts of the experiences of these people and wish to share with you both the positives and negatives of the lives of U.K. migrants.


Gillian was a Canadian citizen until last year, she has recently emigrated from Canada to Britain for economic reasons. She has struggled with the change of culture and is shocked about how unequal men and women are as well as how racial biases prevent her from feeling safe in areas of high population. She believes the British culture is unfair. Due to her Canadian origin, African inheritance and gender, discrimination is common. Abuse is shouted at her and she has been sexually assaulted multiple times in the UK, but English people see it as banter. In her words « she feels she is hunted » preyed on by British citizens with an overinflated sense of self worth. This story perfectly highlights the mistreatment of not only migrants but women and immigrants. « There are topless women in newspapers, lads mags, the pay gap, lack of promotion, discrimination against pregnant women, as well as high levels of rape and sex assaults. » Gillian is now moving back to Quebec after a « culture shock ». More needs to be done in predominantly white European countries to educate them about respecting other people but especially migrants in the UK.


Niko was originally born in Albania. Due to devastating circumstances, at the age of 13, Niko had fled to England. He was unable to speak a word of English, he did not know anyone in the whole country but was taken into care.
“I found being in a new country without the language really difficult, it was very traumatic for me.”


Soon after Niko moved to England, he discovered MMA and this changed his whole life completely. At the age of 17 he became a full time working martial arts instructor and he has “never looked back since”. Martial arts helped him overcome his own difficulties. To this day, Niko holds British titles in kickboxing and MMA. When he fights abroad, he fights for England.Niko has a wife back in Albania. She cannot move due to current immigration law, but the children he teaches and his friends help him through these tough times.


“I feel that despite my difficult childhood I have let the negativities shape me in a positive way to become the happy, inspirational person I am today."


Yan was born and raised in a multicultural home in Mexico. Both his mother (Argentinian) and father (British) were also immigrants. He and his wife moved to Britain to gain work experience and extend their horizons, in addition to helping Yan’s grandfather. They lived in London for three years and gained an understanding of different cultures and traditions from other European nations such as Germany, Uzbekistan and Greece. He also enjoys the social aspect of Britain as racism and gender inequality is not tolerated in society and wishes to keep contributing and giving back to a country that was so welcoming to him.
Current Affairs