Posted by Portsmouth Point on February 06, 2020
by Tilly Goldman 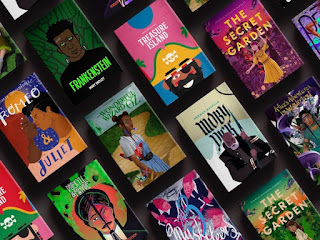 On one hand, I agree with the sentiment of raising awareness and praising the freedom and diversity within our society, a distinct change from when these classic novels would have been published. Barnes & Noble stated that “for the first time ever, all parents will be able to pick up a book and see themselves in the story”. In many ways this aim is SOMETHING as it shows a recognition that these stories exclude almost every racial group in the world therefore, to some extent, this makes the stories more accessible. Particularly as many address issues such as crossing class boundaries and confronting our own demons.

However, a cover itself is superficial, concealing the fact that the story beneath it is rooted in a discriminatory society. This is particularly poignant considering the fact that these covers would have been limited editions: a temporary fix that barely addresses the changes in our society. I personally have never considered Frankenstein's monster to be an icon for racial equality and I am not certain that changing his skin colour from green to brown on the cover necessarily changes this.

Prominent authors such as Angie Thomas, the author of The Hate U Give, and David Bowles, a Latinx children’s writer, were quick to criticise the publishing company for trivialising the issue and doing little other than “disrupting the literary dignity of communities of colour”. It is easy to sympathise with this view because, as opposed to promoting the diverse range of authors on offer, Barnes & Noble actively chose to promote novels exclusively written by white authors. This seems strikingly counterintuitive for Black History Month.

Barnes & Noble have been heavily criticised for providing merely a superficial fix to the deep-rooted issues of racial discrimination. Simply changing the skin colour on the covers conceals the fact that during the period when these classics were written, the concept of racial diversity was unheard of. Does changing the skin colour of a cover really address the issues of discrimination, ignoring the possibility of using a publishing platform to promote racially diverse authors? I would argue that to recognise the struggle of so many against racial inequality and discrimination is to celebrate how our society has developed into a diverse and culturally rich environment where any writer can succeed whatever their background or skin colour.