Sinatra performing career started, thanks to the help of his mother, who had found work for him singing in a group called The Three Flashes. One of his first gigs was at the Hoboken Union Club, and it was here, in 1935, that he got his first “big break”. The Three Flashes were approached by talent scout Edward Major Bowes, who then offered Sinatra work performing in a number of promotional films for his series, 'Amateur Hour'.

In 1943, Sinatra signed a contract with Columbia Records, and was instantly successful. “Sinatra-Mania” was now in full swing - Sinatra scored a phenomenal 23 top ten singles between 1940 and early 1943 alone: to show their appreciation of his talent, his American fans affectionately nicknamed him “The Voice”.
In 1943, Sinatra made his debut at New York’s famed Madison Square Garden. He then caused a sensation whilst playing to an audience of over 10,000 people at the Hollywood Bowl.

Sinatra was now one of America’s top movie stars, and when he returned to New York’s Paramount for a concert, a crowd of over 35,000 fans caused a near riot - later known as the Columbus Day Riot.
In 1945, Sinatra starred in his first film alongside Gene Kelly, 'Anchors Aweigh'. This film was an instant success, sparking a string of movies in which he co-starred with Kelly. At one point of his singing career he was doing roughly 45 shows every month.

Frank Sinatra was also well known for his love life and colorful relationships, which was frequently the object of tabloid attention. Frank married no less than four times; his first marriage was to his childhood sweetheart, Nancy Barbato, with whom he had three children - Nancy, Frank Sinatra Jr and Christina. The marriage hit the rocks when Sinatra had an affair with actress Ava Gardner. She became wife No. 2, when he married her in 1951.


Sinatra maintained a hugely successful singing career alongside his acting career throughout the 1950s and for several decades beyond. Failing health kept him out of the public eye after his 80th birthday, and he suffered a heart attack and stroke in 1996, and a further heart attack in 1997. After suffering his third and final heart attack, Frank Sinatra died on 14 May 1998. 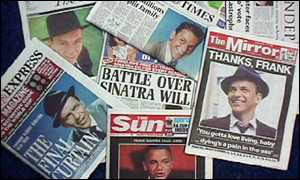 I think it is important to commemorate Frank Sinatra because he was the first “modern” pop star and is an American idol and one of the best male voices there has ever been.