The Impact of Leonardo da Vinci on Renaissance Medicine

Posted by Portsmouth Point on September 17, 2018 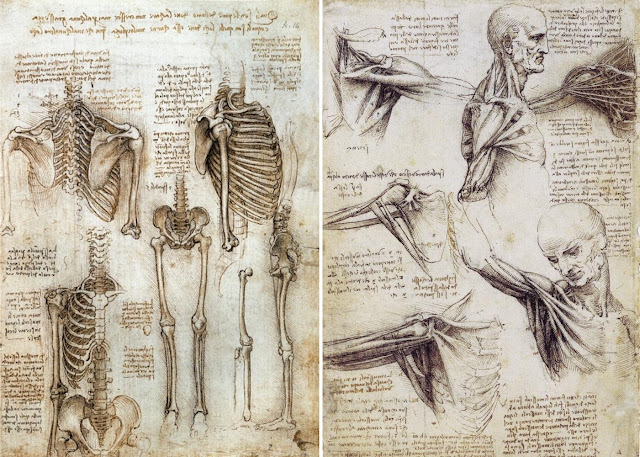 Leonardo da Vinci lived from 1452 to 1519. In an era in which human dissection was forbidden, he drew over 750 drawings depicting the human body. These were extensive and covered practically all aspects of the body, ranging from the cardiovascular system to the musculoskeletal system.

The accuracy of Leonardo da Vinci’s anatomical knowledge impacted upon the precision of the understanding of the body and bodily functions in the Renaissance. His drawings are largely accurate and portray many features and workings of the human body that had been represented in different ways previously. Da Vinci dissected many times, often illegally and used these dissections to look for improvements in his own knowledge. This development of knowledge made a large impact on the study of medicine. Previously, incorrect knowledge of the anatomy lead to Doctors making mistakes in diagnosis and treatment, however the anatomical drawings of da Vinci enabled medical students in the 1500s to draw upon accurate knowledge to treat patients correctly.

Most importantly, Da Vinci’s work often contradicted or advanced upon theories of that time. From the fall of the Roman Empire until that time, the Church controlled the study of medicine, and the accepted works was that of Galen, a Ancient Roman Doctor who lived c. 130- 210AD. The Church’s power over medicine restricted the discovery of new knowledge. However Leonardo da Vinci was an independent artist, disconnected from a medical school and as such he was not limited by these boundaries. This enabled him to ignore predetermined knowledge and allow him to discover concepts of his own. He recognised the importance of dissection and investigating concepts for oneself. He is known to have said that dissection is as important to the artist as conjugations are to the grammarian. This view of da Vinci’s is important when considering da Vinci’s impact, as not only was he developing the knowledge gained in the study of medicine, he demonstrated new ways in which to study medicine and the anatomy.

However, when da Vinci started his anatomical exploration, he made the same mistakes as Galen. Da Vinci dissected animals and attributed his findings in animals to humans erroneously, as did Galen before him. The typical example of this is the jaw bone. Dogs have two bones in their jaws as opposed to the one bone in the human jaw. Galen, when he dissected dogs, concluded from this that the human jaw likewise consists of two bones. Before he dissected humans, da Vinci assumed the same principles.  This would have had a negative impact on the study of medicine, however he was quick to discover flaws in Galen's anatomical knowledge, once he started human dissections. For example he described the flow of urine into the bladder as being governed by hydrodynamic principles. This went against Galen’s ideas of valvular action of channels in the bladder wall. This was fundamentally important to the study of medicine. Expelling the influence of the Church, and renouncing old, incorrect ideas was a common theme of Renaissance medicine and da Vinci started this with his own anatomical drawings.

A crucial factor when considering the impact of Leonardo da Vinci’s drawings on the study of medicine, was the education and information passed down. Da Vinci’s anatomical legacy is the subject of contentious debate. In Leonardo da Vinci: Anatomical Drawings from the Royal Collection. The conclusion is reached that da Vinci had little impact because he produced his work too early, before the revolutionary efforts of Vesalius.This is true to an extent, Da Vinci never presented his work in an ordered, logical way, and so despite his plans to produce a textbook of his anatomical work, his work was never distributed in a widespread fashion. This meant that not all medical students studying in the 1500s had access to much of da Vinci’s groundbreaking discoveries, effectively rendering them redundant.

Despite this, the historian Kenneth Keele argues that da Vinci was the ‘spearhead of the new creative anatomy’ and that he ‘he had stimulated the fusion of art and science in anatomical representation.’ Da Vinci encouraged his contemporary artists, such as Michelangelo, to investigate and study the body. He believed that an artist can only correctly draw the human body in pieces of artwork if the artist had studied the inner machinations of the body. This is highly crucial when considering da Vinci’s impact on the study of medicine, as the introduction of artists into the study of medicine, enabled collaboration between Doctors and Artists which in turn produced some of the most progressive work since the Ancient Roman times, an example being ‘De Humani Corporis Fabrica’ by Vesalius written in 1543, 20 years after da Vinci’s death. Arguably Vesalius was more important in this field, however it is significant that Vesalius’ book embraces the need for artistic study and highlights how da Vinci pioneered the way forward for the study of medicine.

In conclusion therefore the impact of Leonardo da Vinci’s drawings on the study of medicine can be considered to be extensive. As through his correct presentation of the anatomy, others were able to learn and draw knowledge through his drawings. He reduced the influence of Galen and the Church on the study of medicine, through emphasizing the importance of dissection and proving concepts for oneself. This was a huge progression and arguably his most important work throughout his anatomical career. However da Vinci’s impact was not as great as it could have been, due to his failure to publish his work at that time. There is no doubt that much more could have been made of his drawings if they had been published and understood in a coherent, cohesive manner.