The Hidden Stories Behind the Most Iconic Photos of Our Time

Posted by Portsmouth Point on May 23, 2017
by Naeve Molho

‘Photography takes an instant out of time, altering life by holding it still’ - Dorothea Lange

Throughout our lives we are met with hundreds and thousands of images in magazines, books, adverts and all other media imaginable. Rarely do we think about the origin of these images.  We are censored to forget that the people pictured  are real people in real scenarios, brought to us on the glossy pages of a magazine, or through the scroll of a facebook newsfeed .  So what is really happening in these pictures? Who are these people? But most importantly what happened to them?

The ‘Afghan Girl’ is one of the most famous portraits of all time, photographed by Steve Mcurry, and first appearing in ‘The National Geographic’ in 1985.  Likened to ‘The First World’s Third World Mona Lisa’ Sharbut Gula was 12 years old when she was photographed in Pakistan's largest refugee camp due to the Soviet Union invasion in 1979. After the release of the photo Sharbut was offered numerous modeling contracts including a chance to flee to the West yet she refused . Since the photo was taken she married Rahmat Gul at the age of 13 becoming a mother to 3 children while soon after becoming a widow, putting her survival down to ‘the will of God’. She suffers from Hepatitis and most recently received media coverage due to her 15 day jail sentence and fine in 2016 for using an unauthorised identification card. Her illness and ‘ international status as a symbol for refugees’ has been to thank for her early release back to Afghanistan as she could have been facing 14 years in prison.

On August 14th 1945 renowned photographer Alfred Eisenstaedt captured a photo that would represent the end of the war and in particular VJ Day (Victoryover Japan day).  Many believe the photo represents the spontaneity provoked by   happiness in learning the war was over while numerous bloggers have suggested it is a glamorised picture of sexual assault.  The sailor depicted is believed to be George Mendonsa who had been with his girlfriend after spending two years serving in the Pacific.  Meanwhile the woman is said to be Greta Friedman, a dental assistant dressed in a nurses uniform.  Despite being noted as one of the most romantic images of all time Friedman revealed ‘ the kiss was not a romantic event but more of a jubilant act that he didn't have to go back. He grabbed someone dressed like a nurse because he felt grateful to those who had taken care of him’. This photo is romanticised through the viewer's imagination and individual interpretation rather than hard fact.  Sometimes the truth behind photos can in fact distort the image as the story changes.

After having her picture innocently taken one day amidst the horror and misery of Nazi rule, Hessy Taft soon became ‘the perfect Aryan’ baby. TThe photo was published in hundreds of magazines, newspapers, postcards and posters yet little did everyone know, Hessy Taft was a Jew. In fact the photo had been sent by the photographer who had happened to photograph her weeks earlier stating ‘ I was asked to submit my 10 best pictures for a beauty contest run by the Nazis. I sent your baby's picture as one of them, a perfect example of the Aryan race to further Nazi philosophy…. I wanted to allow myself the pleasure of this joke.’ Hessey Taft,  now 80 and a chemistry professor in New York, fled Germany, shortly after the photo was taken, to Cuba. 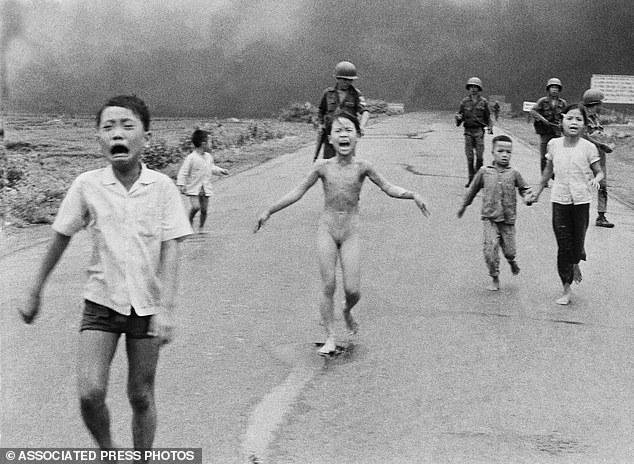 The first picture depicts 9 year old  Phan Thi Kim Phuc running in the road after being burned by a South Vietnamese napalm attack. The photograph was taken in 1972 during the Vietnam war by Nick Ut. Kim had been a resident of Trang Bang when she had decided to join a group of civilians who unfortunately were wrongly identified as enemy soldiers by a South Vietnamese air force pilot. They attacked leading to multiple deaths within her village and burns all down Kim's back.  She remembers yelling Nóng quá, nóng quá ("too hot, too hot") while the picture was taken.  Ut took Kim to Barksy hospital where after a 14 month stay and 17 procedures Kim was able return home.  Ut tells how ‘ once Presidnet Nixon doubted the authenticity of my photograph when he saw it in the papers asking ‘I'm wondering if that was fixed’ ….The picture for me and unquestionably for many others could not have been more real. The photo was as authentic as the Vietnam War itself. The horror of the Vietnam War recorded by me did not have to be fixed.’. Today Kim is a Canadian resident and creator of the Kim Phuc Foudnation ‘with the aim of providing medical and psychological assistance to child victims of war’ and her and Ut remain friends.

The ‘Migrant Mother’ was taken as part of a series by Dorothea Lange of Florence Owens Thompson and her children in 1936 California. Lange says ‘I saw and approached the hungry and desperate mother, as if drawn by a magnet. I do not remember how I explained my presence or my camera to her, but I do remember she asked me no questions.’. The series of images were titled ‘Destitute pea pickers in California. Mother of seven children’. Despite this being an unforgettable image Thompson said Lange would never publish the photos however,  as soon as they were published the camp they lived in received 20 000 pounds of food.  Thompson later went on to have more children totalling 10 altogether and was bought a house in California by them. Despite the choice of luxury she strongly preferred life in a mobile home and later moved back into one.  When Thompson became ill her publicity from the photo helped them to collect $35000 in donations paying for medical care. Her daughter said ‘For Mama and us, the photo had always been a bit of curse. After all those letters came in, I think it gave us a sense of pride.’. Dorotheas identity was unknown for 40 years which did not hinder the appeal or status of the photo ‘ Migrant Mother, "has achieved near mythical status, symbolizing, if not defining, an entire era in United States history.’

Next time you see an image, I encourage you to question its origin and the story behind the fixed photograph that you see.

‘Photography can only represent the present.  Once photographed, the subject becomes part of the past’- Berenice Abbott