Posted by J. Burkinshaw on September 18, 2016
by Ilana Berney 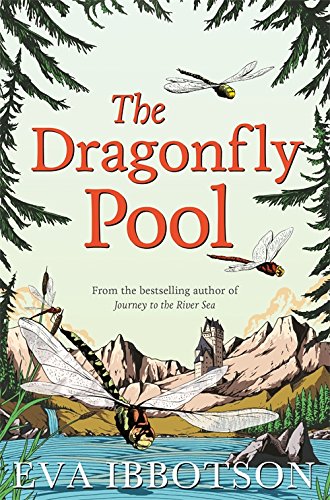 The Dragonfly Pool was written in 2008 by Eva Ibbotson. Set during World War Two, the book centres around an eleven year old girl called Tally Hamilton, the daughter of a poor doctor in London. However, the book does not solely take place in the city; at the beginning Tally is sent off to boarding school in South Devon but the story soon progresses to be set for several chapters in the fictional country of Bergania.

From the outset of the book we have an indication of the warmth and joy that Tally and her personality brings to many people. This welcoming but also inquisitive personality is what drives the story forward and how Tally finds herself in many of the interesting and magical situations and places within the story. We follow Tally from London to the supposedly “stuffy boarding school” through a train journey where we meet many of the key characters of the story and discover, along with Tally, that ‘Delderton Hall’ is not exactly what Tally expected it to be. Known as a ‘progressive’ school, Delderton Hall is a unique school where classes are optional and taught by exceptional and inspiring, is somewhat mysterious, teachers. Tally at first finds it difficult to fit in to the new style of living and teaching but soon finds her feet and makes good friends with her classmates.

The story truly begins when Delderton discuss an invitation to a folk dancing competition held in Bergania (a fictional country in the middle of Europe). After discussion with strong arguments for the trip being led by Tally and her friends, a folk dancing group is put together and travel to the competition. However, the competition does not exactly go as planned…. Several incidents occur which lead to Tally running into the mountains to clear her head where she meets a boy called Karil by a dragonfly pool (hence the name of the book), who gravely needs her help.

With the help of her mysterious tutor and her classmates on the trip, Tally is able to help the get Karil to England, but not without a few mishaps along the way. Unfortunately once in England Karil and Tally are forced to separate and fear that they may never see each other again despite attempts to communicate through letters. Then after several months of sadness from both sides, each thinking the other had forgotten their growing friendship, a series of fortunate events happen that lead to Karil catching the train to Delderton Hall the next September where he is reunited with Tally and, now their, classmates.

Beneath the main plot line following Tally and Karil, several other minor plot lines take place that fit together and are woven with the same magic that Ibbotson puts into the main story line to create a truly outstanding and moving book that tells a tale of friendship, trust and overcoming adversity in the beautiful setting of Devon and the fictional hills and mountains of Bergania. The Dragonfly Pool has been one of my favourite books since I first read it and I would most definitely recommend it to anyone who wishes to just escape from the world for a short space of time and revel in the marvel of the Dragonfly Pool.