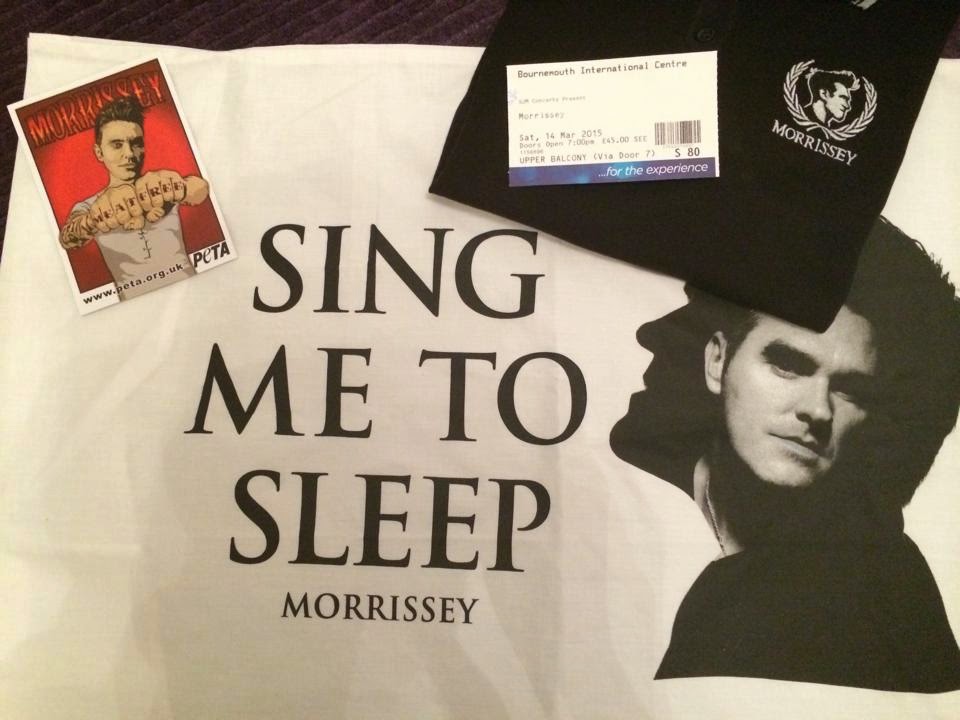 Despite his protestations to tonight’s adoring assembled, Steven Patrick Morrissey is one of those rare charismatic artists who commands faithful, pure devoted love from his fans. Predictable as it may be, I fell in love with The Smiths and Morrissey as a teenager, analysing the poetry of lyrics that spoke personally and directly to me and me alone, just as they have thousands of others before and since, and unpicking guitar and bass riffs to try and understand just what it was that made the music so sacramentally emotive. Sharing a department with fellow superfan Mrs Cross, when it was announced that a UK mini-tour was imminent we decided that a little PRS outing was in order.

Tonight’s Bournemouth gig saw Moz on fine form, despite the recent bout of ‘flu that led him to cancel recent dates during the European leg of the latest album’s World Peace is None of Your Business tour. The show opened, as ever, with montage video footage of some of Morrissey’s idols performing, culminating in the New York Dolls, and a stand-up scene from drag artist Lypsinka. Projected onto a white sheet in front of the stage, this cut to archive anti-Thatcherite footage, before dramatically falling to reveal the band on stage in front of a screen projecting a large image of the Queen, doctored to single-fingeredly salute the audience with both hands.

Swirling feedback and chugging, tribal tom toms combined to open up the set with "The Queen is Dead" from the titular 1986 classic Smiths album, and the energy with which the band attacked the opening number set the tone for a well-crafted 20-strong set comprising a representative sample of his latest album, a smattering of Smiths’ favourites, and a good spread of solo Morrissey from the better part of three decades.

The classic feel continued with 1988’s solo debut "Suedehead", before we moved into current material with "Staircase at the University". For me, this is a standout track on the latest release, and its lyric, dealing with the intense academic pressure high-achieving young people can find themselves under from all sides, is a clear reminder of the importance of being happy and successful in that order.

Morrissey periodically seemed to genuflect, and appeared on his knees with his back to the audience a number of times throughout the performance, and whilst this leant a wonderfully messianic quality to proceedings, upon closer inspection it was a cover for the man to blow his nose and sniff from an inhaler. Despite these sporadic reminders that the malady lingers on, the notoriously moody singer was in playful spirits, bantering with the audience regarding Southcoast seaside superiority (“I hear some people prefer Brighton, though I can’t think why…”) and even dedicating the definitive "Everyday is Like a Sunday" to mothers everywhere for Mothers’ Day.

Morrissey’s soaring operatic baritone was on rampant display, and his band of lads played an absolute blinder. A special mention goes to Matt Walker’s pounding drumming, running right through the set until, cutting a solitary figure at the end of the encore, beating out the final tom runs he commenced to kick the drum kit from the riser, before walking off. Moz took time to introduce his band during the set, culminating in former Polecats’ rockabilly revival guitarist Boz Boorer, who has been part of his band for a quarter-century: “A man who is fond of a large port- quick, someone show him a picture of Southampton docks!”

The blistering set took a serious turn with an extended version of The Smiths’ "Meat is Murder", with scenes from the sobering Farm to Fridge. A short film aiming to expose the barbarism of industrialised brutality resulting from the fetishisation of a cruelty without beauty society seems so happy to blindly embrace for the trivial matter of palate pleasing, was too much to handle for many. The interspersion of blinding light flashed directly at the audience gave the whole segment a nightmarish Kubrickian dimension which served to highlight the powerful message. Although there are some who no doubt feel that such scenes have no place in what is essentially, for most people, a nice evening out, farming industry propaganda means that it is difficult for people to connect with what they eat and to have the option of genuine free choice: for that it is difficult not to commend Morrissey and his tireless, passionate commitment to animal rights. The band moved on to thematically linked "The Bullfighter Dies" from the current album, a good choice as it lifted the tone from the previous number whilst not diminishing its impact.

The set closed with another Smiths’ number, "Stop Me If You Think That You’ve Heard This One Before", which had the crowd on their feet belting out the lyrics. The boys came back for an encore, after a quick shirt change from Moz, finishing on "Speedway" from the Vauxhall and I album. "Speedway" has always been a particular favourite of mine, so I was delighted to hear it played, especially in the pause when the jovial Morrissey wove in a few lines parodying "Bigmouth"… “Bournemouth strikes again!” Morrissey threw his shirt off into the crowd and sauntered off bare-chested to cheers and screams, followed by the band, and, with that, the set was over, leaving the devoted faithful gasping for more. Oh Steven, how could you ever doubt that what we feel is anything but love?
Art and Literature Blog Exclusive Music