Posted by J. Burkinshaw on November 23, 2013
by James Burkinshaw


The first Doctor Who episode I remember watching was "The Green Death" in 1973, featuring the third Doctor, played by Jon Pertwee. Despite (or perhaps because of) his background in radio and TV comedy, Pertwee played the role straight, a charismatic man of action, often resorting to the lethal art of Venusian Aikido to defeat particularly threatening enemies. He was followed by Tom Baker (to whom Dr Richmond pays tribute), who brought a manic energy and sense of wide-eyed wonder to the role; in fact, it seems clear, from Baker's extraordinarily enjoyable autobiography, Who on Earth is Tom Baker? (which chronicles his unlikely incarnations as a failed monk and failed bricklayer before landing the life-changing part of the Doctor) that the fourth doctor's eccentric persona was pretty much a reflection of Baker's own.

I stopped watching after the Baker era, but began again when the series was relaunched with Christopher Eccleston's Ninth Doctor. I agree with Tim Bustin's article that Eccleston's Doctor is underrated; he introduced a new gravitas to the role itself and the show as a whole that then allowed David Tennant and Matt Smith (celebrated by Louisa Dassow and Melissa Smith respectively) the freedom to reintroduce a sense of comedy, played off against the seriousness. However, when asked which of the previous Doctors had most influenced him, Matt Smith replied "I love Patrick Troughton. What I think is wonderful about (him) is he's weird and peculiar but he never asks you to find him weird and peculiar."

That same sense of the weirdness of Troughton's Second Doctor, the genuinely alien and unsettling quality of his character, appealed to me back in the 70s. I was too young to see the original series and his Doctor suffered more than any other from the BBC's habit, during that era, of "wiping" (destroying) copies of episodes following broadcast, so repeats were few and far between. However, nearly all of the series were novelised (by Target Books) and the ones involving the Second Doctor absorbed me most of all. Whereas the First Doctor (William Hartnell) had been a wise, avuncular, elegant figure, Troughton's Doctor often masked his cleverness, presenting himself as an absurd little man, shabbily dressed with a pudding-bowl haircut, not to be taken seriously. Rather like the TV detective Columbo, this pose of being an imbecile was central to the way in which the character manipulated his enemies, until they realised, too late, that he was several steps ahead of them. 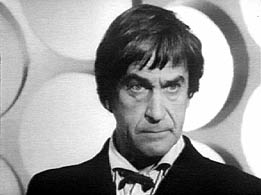 This manipulative quality could be directed at his own companions. Unlike the First Doctor, who treated his companions as beloved grandchildren (in fact, one, Susan, was his actual granddaughter --- implying the existence somewhere of a wife and child, never referred to until the episode, over 40 years later, when a solution to the conundrum was found by "cloning" David Tennant's Tenth Doctor in order to create a daughter), the Second Doctor could be cruel and waspish, sometimes seeming to view the entire human race with a not-so-benign contempt, wondering why he was bothering to save such a ridiculous species and quite prepared to put his own companions in harm's way with little of the heart-searching and agonising that characterises the Tennant/Smith era. Although, Troughton was also the first actor to bring a sense of anarchic comedy to the role (the publicity material of the time referred to his Doctor as a "cosmic hobo"), what made his interpretation so compelling was that, at the same time, he found a darkness in the character not explored to the same extent since (except, perhaps, by Eccleston). Blessed with beetling eyebrows and piercing eyes, Troughton often played villains ---something he had in common with Tom Baker, which is perhaps why they were both so good at capturing the Doctor's alien, non-human quality. I remember finding Troughton's performance as the pirate Israel Hands, in a tea-time TV production of Treasure Island so terrifying that it gave me nightmares. In the Doctor Who episode The Enemy of the World, he played not only the Doctor but also the villain, Salamander (see video below).

My favourite Target book, read over and over again, was The Web of Fear, featuring the Second Doctor battling lethal Yeti robots in an abandoned London Underground pervaded by a poisonous fungus. At least one of the people helping the Doctor is actually being controlled by the sinister Great Intelligence, but we do not know who, which lends the story the quality of a spy thriller (it was written at the height of the Cold War, 1968) as we wait for the "traitor" to be revealed. Written by the prolific Terrance Dicks, The Web of Fear, involved an unusually high body-count, including several characters the reader had been encouraged to admire or grow quite close to (in addition to the usual quota of expendable UNIT soldiers); the Doctor himself is shown at his darkest and even his most despairing. Excitingly, a copy of  4 of the 5 missing episodes of The Web Of Fear (one of the series most keenly sought by "Whovians") was discovered just one month ago in Nigeria (along with The Enemy of the World, in which Troughton plays both protagonist and antagonist) and is now available for the first time in 45 years; here is a trailer (created since the rediscovery):


As you can see, the special effects budget was rather lower then. I have fond memories of one episode from that period in which someone is killed by something that looks very much like a black bin liner. Wiped episodes and bin liners are perhaps indicative of an era in which Doctor Who was seen not as one of the crown jewels of the BBC (just think of the worldwide promotion for tonight's episode) but as an enjoyable children's programme that was seen as rather disposable by a broadcaster that saw its role as "to educate, inform and entertain" (very much in that order). When asked what Doctor Who had meant to him, Patrick Troughton would always reply that, as a jobbing actor, he had simply been glad of three years' regular work. I don't think the BBC Publicity Department today would allow Tennant or Smith to get away with such an offhand response.


.
Blog Exclusive Film and Drama From Teachers Science and Tech