Isle of Wight 2013: Yet Another Amazing Festival 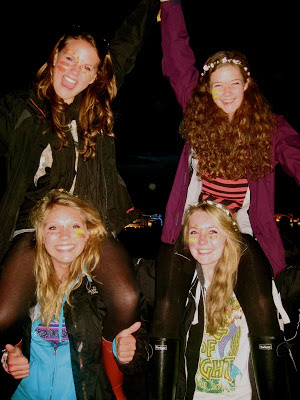 The weekend of the 14th June, 2013 brought three jam-packed days of hard-core camping, astounding acts and thankfully, after the disaster of last year, a lot less mud, with some of our best friends and family.

We entered the Park on the Friday evening, walking past stands that were dotted around everywhere of all sorts, from baskets full of spicy delicacies to shelves teetering with giant teddy bears. We were buzzing with excitement and it became obvious who the headline act was that night, as every few yards we would see yet another person proudly wearing their Stone Roses t-shirt, giddy with excitement. 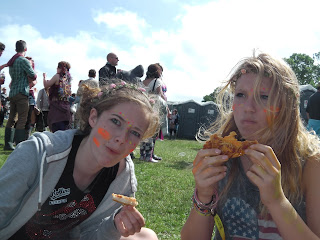 We headed for the Big Top (which, in case you didn’t know, to put it simply, is one GIANT tent) to see our first band of the night, Fun, whilst the adults went off to see Emilie Sande. Fun was, well, fun, and a fabulous warm-up for the night to come. Other acts followed, with Ellie Goulding, who took the crowd by storm as she belted out song after song with incredible energy. Both acts were accompanied by the audience for well-known verses and choruses, creating an amazing atmosphere and sore throats for some.  And, of course, Paul Weller, who got the crowds singing and dancing as he performed old time classics from his Jam days.
The headliner, Stone Roses, didn’t disappoint their fans, playing favorites “She Bangs the Drums” and “I am the Resurrection”. Towards the end of their set, the rain crept in, but, once the fluorescent ponchos were out, we enjoyed the rest of the night, letting the music wash over us along with the rain. Clambering on the bus back to the caravan, wet, tired and the ‘responsible adults’ a little worse for wear, we were ready for a hot shower and our beds. 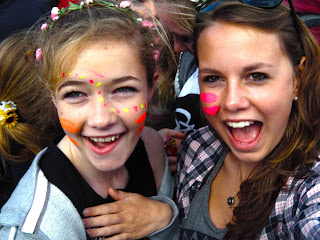 Saturday morning brought glorious sunshine, and overnight the wind had blown away what was to be the only bit of rain we had to experience all weekend. We got on the coach from out caravan at 11am, leaving the groggy parents, and headed back to the Park. The sun was bathing the whole festival in sunlight and everyone was set for a fantastic day of music. Besides watching bands, there was an array of things to do, with stomach-turning funfair rides, as well as a Ferris wheel which gave you an amazing view from the top of the whole park, including the themed bars, one of which was a beach bar complete with golden sand sprinkled along the ground and stripy deckchairs. The silent disco and karaoke were also very popular, but our favorite stall was the Oxygen Bar, where you were hooked up with bendy blue tubes onto what looked like drips, through your nose. You would then breathe in an array of scents from bubbling oxygen through bottles containing aromatic solutions. But don’t worry; they replaced the tubes each time (otherwise, a pandemic of some sort would have spread across the festival in a matter of hours)! We even got to keep ours as a souvenir of the bizarre experience. 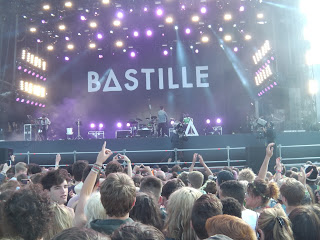 Later on in the day, Bloc Party, The Macabees, Bastille and particularly Ben Howard (who the ladies of the audience seemed to pay particular attention to) gave some very moving and mind-blowing performances, but the Killers stole the evening with a set booming with energy, complete with a plethora of luminous light strobes, radiant lasers and explosive confetti cannons.


When Sunday rolled around, our excitement began to build up even more, as this was the day we had been looking forwards to the most. Imagine Dragons were scheduled to play later in the day, and putting into words how incredible it would be to see them perform live is an impossible task. We were utterly determined that we were going to get as near to the front as humanly possible.

We waited patiently through Republica (a group whose fans consisted of middle aged men with receding hairlines) and Kodaline one after the other in the Big Top (our strategy was to move closer to the front as each band finished their sets, to secure the best spot for Imagine Dragons.) During this time, whilst we enjoyed the music and even joined in with a flash mob, the oldies enjoyed Newton Faulkner and Boomtown Rats on the Main Stage. The Boomtown Rats were re-united for the first time in 27 years, and apparently were as slick as when they first appeared, according to the adults. 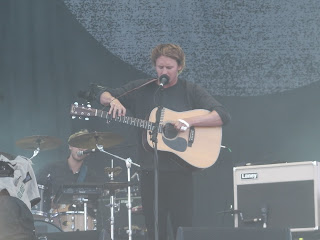 Finally the moment arrived, and our three-hour wait had been worth it. We had  made it to the front (quite literally clinging desperately onto the metal barrier dividing the crowd from the stage) waiting in anticipation for Imagine Dragons. We are not in the slightest ashamed to say that we instantaneously turned into hysterical teenage girls and even mauled the lead singer as he came down to the crowd, within touching distance. To add to all this excitement, we even found our 15 seconds of fame, with shots of us on Sky TV, YouTube and the Official Isle of Wight Festival website. They played the most fantastic set of songs, which had to of course end on the mind-blowing ballad “Radioactive”. The whole arena was jumping up and down, screaming and singing, the vibrations of the music burrowing their way into your chest until you felt as if you heart beat was pounding in time with the hammering vibrations of the drums. 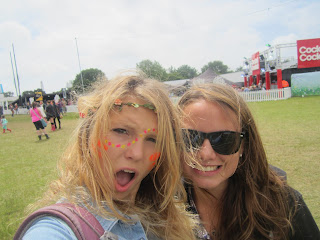 Euphoric, (and some a tad tearful) we left the Big Top and joined the parents at the Main Stage, to lie in the sun for a chilled out moment of easy listening to Paloma Faith, who was followed by The Script.

As the weekend began to come to a close, the headliner of the weekend was yet to play: Bon Jovi. After a slow start, they picked up the beat, performing their all-American rock classics, with us dancing and singing at the tops of our voices with complete strangers, with the terrible realization this blissful weekend was coming to an end. The night ended with a sky lit full of glittering fireworks, which lit up the night sky for people to see no matter where they were on the island. As we trekked out of the Park to board our coach for the last time, we looked around to see the array of people: of all ages and backgrounds dressed in festival hats, silly outfits and face paint smeared across their faces, with each and every one grinning form ear to ear as they made their way out from the festival grounds. It had been yet another amazing festival, where hundreds of wonderful memories were formed, with our families and friends. 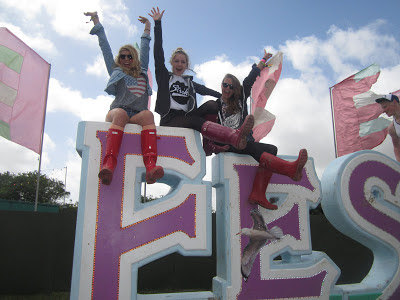 Isle of Wight Festival, we will see you next year.
Blog Exclusive Music