Four weeks ago today, I would have been leaving my house to catch a plane to for a five-day visit. This thought reminds me that the best foreign experience I have ever had is fast slipping into the domain of familiar anecdotes and embarrassing photos tacked to pin-boards – a fate that most great holidays suffer. In order to slow this outcome, I decided to write an article on one of my favourite aspects of the trip: visiting the . As an art junkie, I can’t possibly do justice to the Museum in one article, but I will attempt to abridge any long-winded commentary by presenting my 5 highlights: I had heard of this piece before, but was properly introduced to it first in the book ‘Introducing Postmodernism’ by Richard Apignanesi and Chris Garrett. The book argues that Picasso’s early Cubist work is the ‘first truly modernist painting.’ Depicted are prostitutes from a brothel in – women that Picasso uses to convey his fear of syphilis and, moreover, to declare his own ‘new anti-representational model of deformation.’ The significance of the work in the book is that it represents the end of fine painting as the authority to reproduce reality – especially after the invention of photography.

As with any famous painting, a reproduction or imitation is nothing compared to the real thing. To see this work in the flesh, a figurehead for a cultural revolution, was quite incredible to say the least. If you ever visit with any interest in art, I would definitely recommend seeing it!

A contemporary art exhibition is always worth the visit. For me, two works that I was most captivated by were Doris Salcedo’s ‘Atrabilious’ and Senga Nengudi’s ‘R.S.V.P I.’

This work by Salcedo, a Colombian artist, is made from old shoes encased in a row of wall alcoves, behind stitched sheets of translucent animal skin. The shoes all belonged to women who were 'disappeared' in the Colombian Civil War, and were donated to the artist by victims' families. Salcedo’s work bears witness to the violence and loss that individuals of her nation have experienced during its recent history.

This work of Feminist art is made from pantyhose that have been pulled, knotted, tied and filled with sand in order to create drooping, swollen sacks, and stretched to create taut limb-like forms. The artist explained she was ‘working with nylon mesh because it relates to the elasticity of the human body. From tender, tight beginnings to sagging… The body can only stand so much push and pull until it gives way, never to resume its original shape.”

This small focus installation of the Goldfinger opening credits would certainly interest any James Bond aficionados - but also art lovers - for it is the first film title sequence to enter the MoMA’s collection as a work of art in its own right. Its maker, Robert Brownjohn (above) shows, through the iconic moving picture, that accesible popular culture and art can be symbiotic. Scenes from the film are projected strategically onto the bikini-clad body of starlet Margaret Nolan, while minimal credit texts balance each clip, with the shots accompanied by Shirley Bassey’s theme song of the same name. The installation also features related preparatory material.

One of the four versions of, probably, the most recognisable and universally translatable artwork in the world, The Scream is a must-see masterpiece. I genuinely couldn’t believe I was looking at it in the flesh when I saw the orginal. It is startling and brilliant regardless of its present-day ubiquity. The piece is, as the MoMA’s gallery label text says, ‘a haunting rendition of a hairless figure on a bridge under a yellow-orange sky’ that has ‘captured the popular imagination since the time of its making.’ In its conception, Munch aimed to explore the progression of modern life by focusing on the themes of love, angst, and death.

The Scream is on view at the MoMA for six months. I would also recommend seeing some of Munch’s other works within the same Painting and Sculpture Gallery – such as his colour lithograph of Madonna – 1895 - 1902.

Only two of Kahlo’s works are on view currently at the MoMA. I say ‘only’ because, in my opinion she deserves a whole permanent exhibition devoted to her. Seeing her works ‘My Grandparents, My Parents, and I (Family Tree)’ – 1936 and ‘Fulang-Chang and I’ – 1937 was really the pinnacle of my visit. 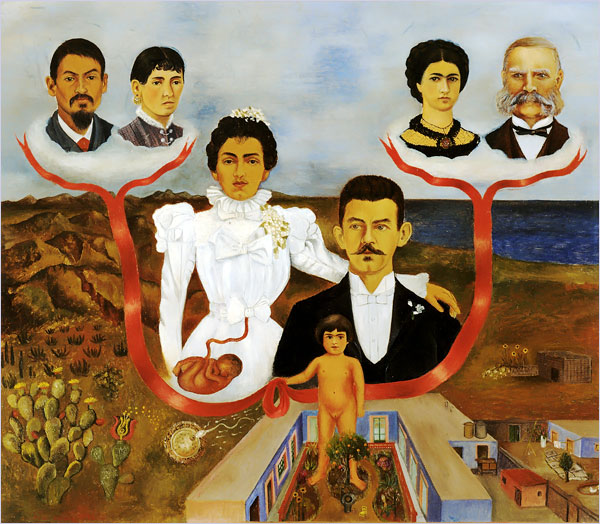 Kahlo herself was a collector of eighteenth and nineteenth century Mexican retablos (small paintings on metal made to thank God or saints for miracles) and, as shown here, she adopted the medium as her own. This work is a family tree in which Kahlo portrayed herself as a foetus and also as a naked child in her family home. This painting is as much a tribute to Kahlo’s European and Jewish heritage as it is her Mexican heritage (widely invoked in much of her art). The sea on the right signifies her German Jewish father and his parents and the land on the left signifies her Mexican mother and her parents. She made this artwork shortly after Hitler created the Nuremburg Laws – which forbade marriage between Jews and Aryans. Thus, since the painting is actually in the format of a Nazi genealogical chart (used to promote racial purity) she subverts such ideology in celebrating her own mixed heritage. This painting shows Kahlo with one of her pet monkeys, animals which are often interpreted as proxy for the children that she and her husband, Diego , could not conceive. The work was featured in Kahlo’s first major exhibition (Julian Levy Gallery, New York 1938.) She was hailed as a ‘self-created Surrealist painter.’ Kahlo, however, did not agree with this appraisal, saying: “They thought I was a Surrealist but I wasn’t. I never painted dreams. I painted my own reality.”

One of my favourite artists, Frida Kahlo’s work is not only worth seeing, but also worth researching and appreciating.

Overall, this article, if nothing else, probably serves to affirm my own love affair with and its art scene. Everyone should visit at least once in his or her lifetime…for the MoMA and the bagels, if nothing else.
Art and Literature Blog Exclusive Travel