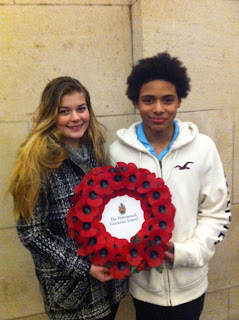 Many people associate a visit to Belgium with trips to chocolate shops, eating mussels with frites and drinking beer brewed for generations by Trappist monks. Yr 9’s visit over the February half term holiday accommodated some (but not all) of these activities as their attention was focused mainly on gaining a greater understanding of the conditions facing soldiers on both sides of the Great War (1914-18) in and around the town of Ypres in Flanders.
This was a hugely enjoyable yet moving trip to the scene of one of the world’s most devastating conflicts. Pupils were given a fascinating insight into how battles were won and lost, how troops tried to survive the day-to-day atrocities of the trenches and what they might have done in their spare time in order to recuperate from the horrors of war. Visits to Talbot House and the Execution Post in Poperinge showed acutely the polarising aspects of the First World War – one, a place for R&R for all ranks as troops took a break from the front line, the other a place of stark contrast illustrating the sometimes brutal behaviour demonstrated in executing soldiers from your own side. 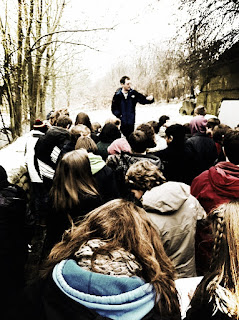 The Allied cemeteries at Lijissenhoek (which accommodates the graves of three Old Portmuthians) and Tyne Cot also contrasted hugely with the rather grim setting of the German cemetery at Langemarck, however, the sheer scale of loss became apparent when we learned that some 45,000 German troops were buried beneath our feet in what was a relatively small space. The visit to the site of the Essex Farm Advanced Dressing Station which inspired Canadian doctor and poet, John McCrae, to write ‘In Flanders Fields’ provided all of us with a poignant reminder as to the fragility of human life and to the futility of human sacrifice on such an epic scale.
Perhaps the most emotional aspect of all, however, was taking part in the evening ceremony at the Menin Gate. Here, the whole of Ypres stops for 2 minutes silence underneath one of the town’s ancient gates that has now been recreated as a memorial to those 55,000 who fell during the Great War but who have no grave, no headstone. Traffic is stopped, buglers are summoned, the Last Post is played, wreaths are laid and exhortations are read in a ceremony that has been taking place every day since 1928. This was no showy act of Remembrance, full of pomp and circumstance, but rather a simple and sombre occasion made more relevant on this occasion by the relentless and pouring rain. 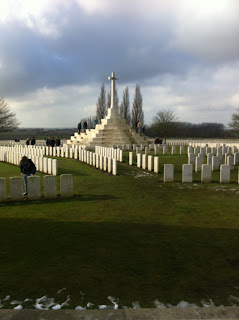 As we approach the centenary of the outbreak of the Great War, remembering those who have died so that we might be free becomes more not less relevant. For those pupils and staff visiting Ypres on those cold and dark days back in February, a reminder of all that took place in the fields of Flanders ninety nine years ago gave us further perspective and insight into our lives today. It was certainly a trip of Remembrance and one to remember. I hope pupils will not forget its importance and relevance as they begin their journey through life.
Blog Exclusive History Travel