Posted by J. Burkinshaw on December 02, 2012
by Peter Jordan


This week, there will be a lot of coverage of the Chancellor of the Exchequeur's Autumn Budget Statement. This will focus on how much Government spending has exceeded what they have received via the tax system and what the Chancellor plans to do about it.

To understand this you will need to have at least a basic understanding of mathematics. Sadly, this means that most people won't have a clue what the Chancellor is talking about; according to a recent study for the Government, just 1 in 5 adults have sufficient mathematical skills to achieve a Grade C or better in GCSE Maths. This study also showed that if you are good at Maths (everyone at PGS falls into this category) you will have the opportunity to earn more money and become wealthier than most of the population during your adult life.

To give you an idea of how important this will be for your future happiness it is sobering to look at the results of another study by the Institute of Fiscal studies. This study showed that 50% of the adult population (16 to 64) earned less than £418 per week. After tax and national insurance this means they take home no more than £333 per week. To give some context the average weekly cost of a place at PGS (including uniform costs and things like trips) is circa £280 per week.

Although the distribution of income is uneven, the share of wealth (savings, shares, pensions and the value of things you have bought like property and cars) is even more uneven. The top 10% of households own 42% of the nation’s wealth. This means that if total wealth was £100 and there were 100 people, then the richest 10 of these own £42 of the wealth (£4.20 each) while the other 90 people would own £58 between them (on average £0.64 each).

This suggests that you need to set your sights high and focus on being in the top 10% or even 1% of earners to enjoy a life free from financial stress even if this means taking Maths a little bit more seriously! It also explains why there is so much noise when it comes to working out who should pay for the spending that currently exceeds taxes.

Even after 2 years of cuts, the situation is far from under control. In September the Government collected £42bn pounds but spent £55bn.  This would be equivalent to you spending £13.10 when you only received pocket money of £10 per week! Unless your parents agreed to give you more money, you would obviously have to find a job to earn £3.10 to allow you to carry on spending at this level.

Although everyone working more would be the best solution for our country, the big problem we face is that very few people work. Most people are oblivious to this as the statistics are quite complicated. However, the bottom line is that only 1 in 3 people in the UK (20 million out of a total population of 62 million) have a full time job. Is it any wonder that the taxes aren’t high enough to cover all the money the Government is spending on our behalf? 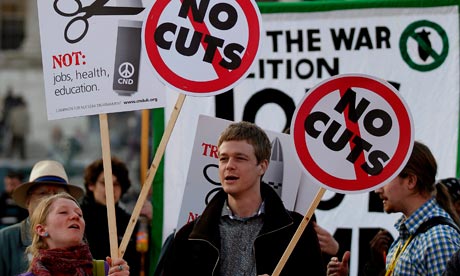 The main problem the Chancellor faces is that nobody wants to have their pensions or benefits cut, nobody wants to pay higher taxes, university students don’t want to pay for their education, people want 5-star health care and rich companies and individuals will pay a small fortune to accountants to make sure they pay virtually no tax at all. This is why Government’s just keep borrowing more money.

However, borrowing more and more money is not a sustainable strategy and carries the risk that we end up in as much trouble as Greece and Spain. So, since the youth of the day will have to sort this mess out in the years ahead, what do the finest minds of PGS think we should do?