Posted by J. Burkinshaw on August 01, 2012
On the day that Britain receives its first two gold medals of the London 2012 Olympics, we publish Chris Dossett's tribute to double-gold medallist Daley Thompson. 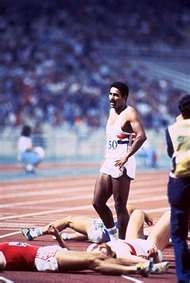 Daley Thompson, two-time Olympic decathlon gold medallist, was my schoolboy hero. He was able to dominate other athletes physically and mentally; he oozed charisma and was always able to bring out a big performance when it mattered. He trained twice on Christmas Day so he knew he had completed more training sessions than his rivals; his work ethic was incredible. As well as being an outstanding decathlete, he was good enough to represent in the Pole Vault, Long Jump and 4 x 100m relay, he also played professional football and was a key member of ’s 2012 Olympic bid team.
The final event of the decathlon in the 1500m, in the 1980 Moscow Olympics, Thompson was assured of a gold medal and jogged round in just over 4.30 minutes; the image of the newly-crowned Olympic champion standing at the end of the race whilst mere mortals collapsed on the ground around him is iconic. During the next four years Thompson built up a healthy rivalry with the German decathlete Jurgen Hingsen. The German decided that he would not speak to his rival in the run-up to the Olympics and always appeared aloof in contrast to Thompson’s “uber” enthusiastic boy-next-door approach to life. After the first day’s competition of the 1984 Los Angeles Olympics, Hingsen was behind and decided to start a conversation with Thompson at the start of the second day. Thompson’s reply was that he was going to beat Hingsen by a little bit but now he was going to destroy him --- and he did. He had a brief wobble in the discus with two poor throws and knew a third would erase all hopes of a medal. He entered the circle full of confidence and threw a new personal best with his final throw and went on to win the gold medal with a new world record total.
I have always admired Daley Thompson’s charisma and work ethic. To remain undefeated for over nine years in such a demanding event as the decathlon is truly extraordinary.